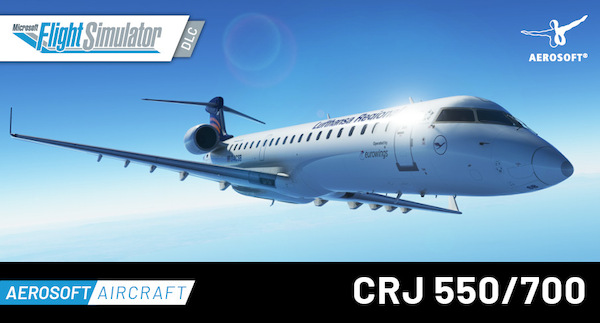 Product information: "Aerosoft Aircraft CRJ 550/700"
Piloting commuter aircraft is most attractive for flight simulator fans that like flying according Instrument flight rules (IFR), but have limited time available to spend. Commuter aircraft servicing connections from smaller airports to the big hubs and vice versa and are intensive flying in the real world as well as in the simulator.

The Aerosoft CRJ 550/700 for the current Microsoft Flight Simulator has been built on the experience of the developers from the CRJ family offered for FSX and Prepar3D. Yet the new technology available within MSFS gave all developers involved the opportunity to use the latest in design, system and flight model programming. Therefore, they were reconstructed from ground up to match the new standard in look, function and flying characteristics. This small high-end airliner was created with the gracious support of Microsoft and Asobo, which ensured that the new features of the Microsoft Flight Simulator could be implemented.

Highly detailed modeling based on many photos of the original aircraft
Covered with high resolution PBR textures that convey virtual reality extremely well
The possibilities of the new flight simulator engine are mostly utilized
Fluid animations of moving parts such as landing gear, flaps and doors
The cockpit shows detailed modeling and animations that provide a realistic look and feel of this popular airliner
Support of advanced features, such as rain effects, etc.
The flight model is based on Flight Simulator's new aerodynamic model to provide more realistic behavior of the CRJ in all flight conditions. It has been fine tuned to reflect the performance and reactive behavior of the CRJ
Included are the CRJ 550 and 700 models with 9 liveries
Systems:

Detailed performance calculations based on actual weight and balance and graphical display of actualized load sheet
Transfer of weight, fuel and calculated V-speeds into the FMS, if desired
Checklists for all flight situations
Individual configuration settings for aircraft maintenance, preferred aircraft state when loading and additional options
Chart display (NavDataPro Charts and Navigraph charts) with position tracking
This option will be made available free of charge as soon as the SDK allows it!

Simulator options and extra's:
Eight manuals, including detailed step-by-step documentation
Immersive sounds created using Wwise (so full FS standards)
Many new options to tweak the product to your likings and your hardware
"Come fly with me" by The Dude:
In this special series you will learn more about the CRJ basics, systems and more from an experienced CRJ pilot. You can find the different episodes here (Youtube).