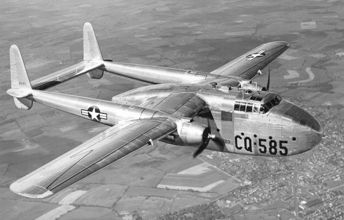 This product was added to our database on Wednesday 9 july 2014.

During outbreak of War World II, the mainstay of cargo freight operations in USAAF was catered by the C-47 Dakota, C-46 Commando and the C-54 Skymaster but they were built as pre-war civil passenger aircraft, not as dedicated cargo aircraft. In 1941, USAAF issued requirement for a large capacity cargo transport aircraft. Fairchild responded with a submission by their Model 78, and Army representatives were impressed with the design. In 1942 Fairchild received contract to build two prototypes designated as the XC-82, competing for the same contract was the Budd RB-1 Conestoga , Curtiss-Wright YC-76 Caravan and Waco YC-62. The first Fairchild XC-82 took to the air in 1944. Further flight tests were so positive that the Army issued Fairchild contract for 100 production C-82A. In 1947, Fairchild developed an improved Packet, which had more powerful engines, increased cargo and weight capacity and a relocated flight deck. The resulting aircraft became the C-119. Due to its obsolescence, the Air Force removed the C-82 from its inventory in 1954.