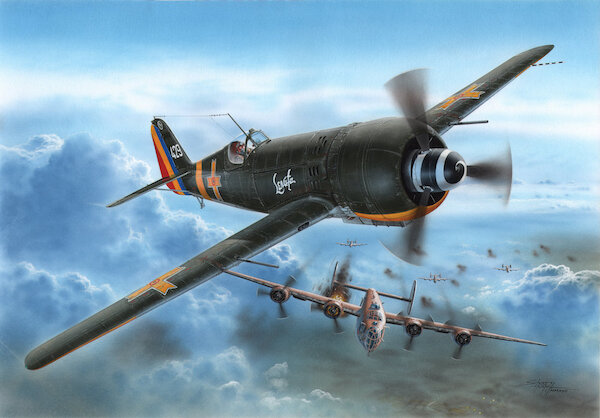 This product was added to our database on Wednesday 19 july 2017.

(ex Azur-Frrom)
In the late 1930s, the Polish PZL P.11 and P.24 all-metal, high wing fighter planes were produced under licence by IAR, Industria Aeronautica Romana. Using the P.24's fuselage structure, a new fighter plane was created by a design team led by Ion Grosu and the plane was named the IAR -80. The new fighter had performance approaching that of contemporary foreign designs like the Hurricane, P-36, MS 406 and Bf 109D. Various changes to weapons led to the IAR-80A, B and C sub-versions, and also the IAR-81C which was designed for fighter-bomber role during spring of 1941, although it served in both air interceptor and ground attack roles. The IAR-81C was the most numerous sub-version to be produced (from no 300 to 450), deliveries starting early in 1943.Total production for IAR-80/81 series totalled around 450 units, but ceased (as well as the production of the Bf 109 type that only had just begun) after the American bombing of Brasov factory, on April 16th, 1944.

The Romania Air Force's fighter and ground attack units were equipped with the IAR80/81 type right from the beginning of the country's involvement in the Second World War and until the end of hostilities. The first fifty IAR-80 airframes were in service during the attack against the Soviet Union on June 22nd, 1941. The IARs of the 6th Group (61st and 62nd squadrons) and the 8th Group (41st and 60th Squadrons) were engaged Stalingrad front during the autumn of 1942. August 1st, 1943 saw IAR-80 & 81s defending the Ploiesti oil plants from attack by USAAF B-24 Liberators, during "Operation Tidal Wave", when the Rumanian fighters downed some of the heavy bombers. On June 1Oth, 1944, IAR-81Cs from 6th Fighter Group confronted P-38 Lightnings belonging to the USAAF 82nd and 1st FG (American pilots mistakenly reported having fought Fw-190s).

Romania joined the Allied powers in August 1944, and changed back the national insignia worn by its aircraft from crosses to traditional blue, yellow and red roundels. Being under Soviet command, the IAR-80/81 units saw combat over Hungary and later also during the liberation of Czechoslovakia over the areas of Moravia and Slovakia, where they enjoyed and suffered their final victories and losses. Remaining airframes of the 80/81 type kept on serving in Romania until the 1950s, some of them also being rebuilt in 1950 to advanced trainer version known as the IAR-81DC.
Beneath the kit box lid with eye-catching action picture a combat-engaged IAR aircraft, the modeller will find five sprues with inject-moulded styrene parts, some of them made using metal tooling moulds, a clear cockpit canopy and several other clear parts, nicely detailed resin parts and a set of PE parts. The decal sheet printed by Italian Cartograf in superb quality caters for four Romanian machines, three of them bearing war-time crosses and the last one in post-war scheme with Romanian roundels.