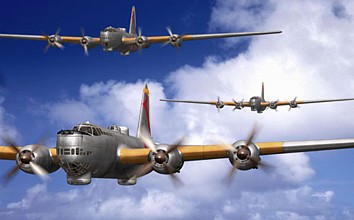 In early 1943, as the war situation worsened, Nakajima had to develop a very long-range Fugaku bomber which could be able to mount bombing raids against targets along America's western seaboard. The Fugaku project impressed the Japanese Army and Navy. However, it was deemed too complex, and would not be available in service. The Japan Army shifted quickly away from the project and sought to other possible development from Kawasaki. Kawasaki began investigating a four-engines bomber design which compared configuration to the American B-29, it was proving to be a superior airplane to the best of the bombers then in service. The design was accepted and was given designation Ki-91. A flying prototype was started from a drawing board but progress was slow by lack of required materials. In February of 1945, the Ki-91 prototype was partially completed but work was forced to cease, as all the facilities to complete the Ki-91 in Kawasaki's plant were destroyed by bombing raids from B-29s.