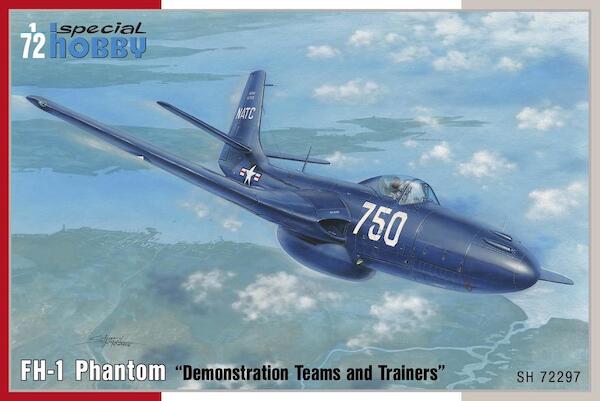 This product was added to our database on Monday 25 June 2018.

The 1/72 Phantom jet was already in our production range back in the 1990s in the form of a short-run type model kit. Now, we have prepared for you a completely new, 3D-designed, cutting-edge model which, apart from the name Phantom, has absolutely nothing common with the previous one. There are three sprues of grey injected moulded styrene, one clear sprue and on top of it also a fret of etched details. The decal sheet was expertly printed by Italian Cartograf and caters for four machines, three of which are in the military standard of dark blue while the fourth option portrays a civilian machine in white overall with red trim. Make your choice from the following options:

no. 750 operated by the NATC and flown by Rear Admiral Apollo Soucek, member of the Gray Angels aerobatics and display team.

no. 108 assigned to Naval Air Station Grosse Ile, 1951, with the fuselage band in Orange. On the occasion of a public show, this airframe was carried an enlistment poster underneath its canopy, the poster is also in the decal sheet.

A-FH-1 of the Marine Phantoms display team of VMF-2, with yellow trim.

FH-1 Phantom, N2482A, as used for the pilot training in Teterboro School of Aviation.