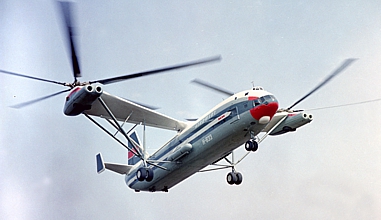 In 1961, the Soviet Air Force issued an requirement for a heavy lift helicopter able to carry major missile components. It would be worked together with the Antonov An-22 airlifter that would carry remote missile launch site. Mil OKB was selected for a tandem-rotor layout development. The bureau claimed a twin side-by-side rotor and a fixed-wing fuselage resembling configuration had better stability. In 1965, the Mi-12 project was started. Two prototypes, both being V-12 were built. The first prototype made its first flight in 1968 and crashed in 1969, but the second prototype established seven world records in the same year. In 1971, the V-12 was publicly displayed at the Paris Air Show and was received NATO codename Homer. In the meantime the military concept of deploying missiles had been altered since some of the missiles were phased out. The intended Mi-12's mission was deemed no longer existed. The Soviet Air Force refused to accept the helicopter for state acceptance trails. All development on the V-12 was stopped in 1974. The second prototype remained at the Monino Air Force Museum and is on public display.