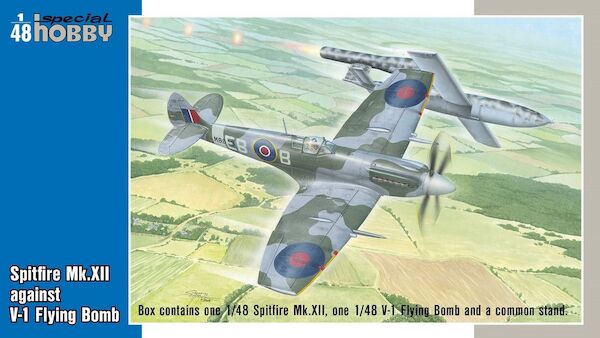 The Spitfire Mk.XII was a less widespread version of this famous fighter mainly due to the low amount of aircraft produced. Nevertheless, for the Spitfire development it is one of the most important versions. It was the first Griffon powered production version. The production had started in October 1942 when some of the Spitfire Mk.IX (originally Mk.V) and Mk.VIII
fuselages already on assembly lines were converted to Mk.XII version. Mk.IX fuselages featured non retractable tail wheels while Mk.VIIIs had retractable tail wheel and wing fuel tanks. Spitfire Mk.XIIs were assigned to No. 41 and 91 Squadrons. Both squadrons covered the airspace of South England, La Manche Channel and French and Belgian coastline. Not only that Spitfire Mk.XII intercepted Luftwaffe bombers but they also successfully escorted Typhoon fighter bombers or were part of US bombers' escort heading due to France. Even though Spitfire Mk.XII first victory was Junkers Ju 88, the rest of the tally creates only enemy fighters; 42 Fw 190s, 19 Bf 109s, 46 V-1 flying bombs and one balloon. The kit contains three sprues with plastic parts and photo-etched parts.