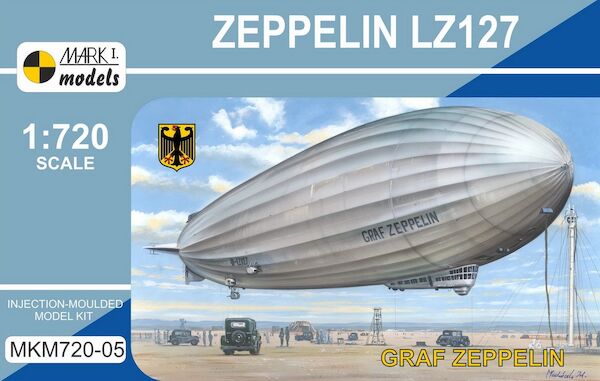 This product was added to our database on Wednesday 19 july 2017.

Rigid airships were produced and employed in the period from the early 1900s to the end of the 1930s. During WWI the Zeppelin company built nearly one hundred military airships both for army and naval service.
Certainly the most successful zeppelin ever built was the civilian LZ127, christened "Graf Zeppelin". Its construction began in 1926 and it was launched in September 1928. The LZ127 airship consisted of a structural metal framework covered in doped fabric containing cells filled with hydrogen lifting gas. It was fitted with vertical tailfins and horizontal tailplanes with control surfaces. Forty crew members and 20 passengers were carried in a contiguous gondola built into the forward ventral portion of the airship, while five suspended gondolas (cars) mounted Maybach engines with pusher propellers.
During its nine year career, the LZ127 made the first commercial passenger flight across the Atlantic and around the world and it began regularly scheduled commercial service between Germany and South America. The airship also participated in a scientific mission over the North Pole and aroused intense public enthusiasm around the globe. The airship flew over 1.6 million kilometers on 590 flights, carrying over 34,000 passengers without a single injury.
Colour schemes included in the kit:
1) Zeppelin LZ127 'Graf Zeppelin', D-LZ127, Black D, "First Flights 1928-29"
Operated by the German Airship Transportation Corp. (Deutsche Luftschifffahrts-Aktiengesellschaft, DELAG).

This injection-moulded kit contains 46 parts, including a useful model stand. The kit length is 329mm (12.9in). A comprehensive instruction leaflet and a decal sheet are included.
PLEASE NOTE: This type of airship has never been kitted in this scale, you may recall Revell offering which was in fact "Graf Zeppelin II", MK1's kit depicts an earlier and different airship type