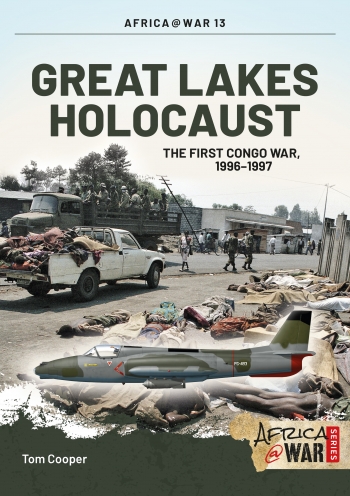 Great Lakes Holocaust is the first in two volumes covering military operations in Zaire - as the Congo was named from 1971 until 1997 - and the Democratic Republic of Congo at the turn of the 21st century. This volume explores the events of the 1980s and 1990s in Rwanda and Uganda, which eventually spilled over the borders into Zaire, resulting in one of the worst tragedies ever to befall an African region.

The narrative traces the ascent of crucial Rwandan, Congolese and Ugandan military and political figures, and their connections within influential business and political circles in and outside Africa. It examines the build-up of the Zairian military under the government of dictator Mobutu Sese Seko in the 1960s and 1970s, and provides an in-depth study into reasons for its near-collapse in the early 1990s.

The military build-up of Rwanda and Uganda is discussed in detail as is their planning for operations inside Zaire, and the global logistic tail that provided the Rwandan military, particularly, but also most of its opponents, with a capability of not only waging war beyond their borders, but - in the case of Rwanda - of invading and practically conquering a country the size of Western Europe or the USA east of the Mississippi.

The book further traces the covert Rwandan military actions inside Zaire, initially run under the guise of an insurgency by one of Zaire's ethnic minorities; how ever-deepening Rwandan operations inside Zaire were practically dictated by concentrations of Hutu refugees; and how the insurgency - led by Laurent-Désiré Kabila who was installed by key Rwandan and Ugandan military and political figures - developed into an organization that sought autonomy from the military and political dictates of Rwanda, in turn delivering a direct reason for the Second Congo War which was fought from 1998-2003.