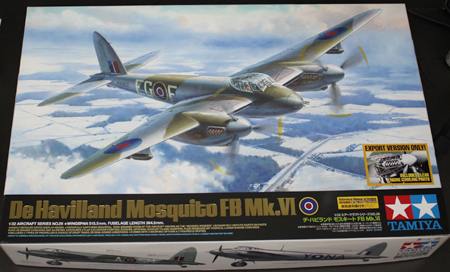 This product was added to our database on Friday 23 October 2015.

This special T2M edition also includes French and Belgian decals!  Only 300 copies made

The "Wooden Wonder" makes an appearance in highly impressive 1/32 scale! That was the nickname given to the De Havilland Mosquito series of aircraft, an ingenious and beautiful design which saw the versatile airplane made almost entirely out of wood. Its outstanding speed and range ensured that the FB Mk.VI was used in a range of missions, including raids on important targets and infrastructure in the German homeland. It is often sid that, until the advent of the Messerschmitt Me262, the German Luftwafffe did not have an adequate response to the "Mossie."
At 51.5cm in wingspan, this masterpiece captures the elegant twin-engine form of the FB Mk.VI with astounding detail. This newly-tooled model was researched using real Mosquitos. The cockpit interior is realistically depicted, right down to the details such as the pilot's seat cushion. Separate parts recreate bomb bay and wing underside 500lb bombs, plus 50-gallon drop tanks. Three figures are included, as are 3 marking options and masking stickers. A 12-page B5 size commemorative booklet includes color photographs and a detailed history of the Mosquito.