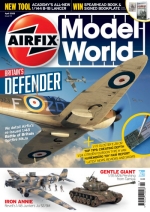 Subscribe and Save
Save up to Ł30 on shop prices when you take out an Airfix Model World subscription.

REVIEWS: ON THE SHELF

Out and about - Nuremberg News
There were announcements galore at this year's Nuremberg Toy Fair, as Editor Stu Fone discovered.

Back to Basics - Part 4: The illusion of Depth
It's a return to the interior as we examine how to enhance moulded detail in aircraft cockpits using a mix of highlights and shading.

Intermediate Build - America's Tiger
Coinciding with this month's release of Spearhead in paperback, Dave Oliver builds Tamiya's 1/35 M26 Pershing as one of the vehicles used during the latter stages of World War Two.

In Focus - Prowling Pershing
We provide modellers with a photo montage of the events depicted in Spearhead, courtesy of Atlantic Books.

Advanced Build - Britain's Defender
Airfix's 1/48 Spitfire Mk.I has been re-released with new markings; we add aftermarket embellishments to 'spice up' the basic styrene.

Out and About – After a Winter's 'Rest'
Bolton's annual show is now established as one of the year's 'big three' events. This latest gathering had much to delight modellers of all ages and skill levels.