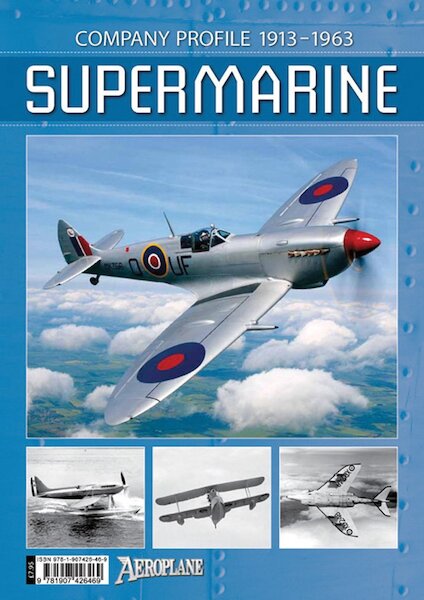 This product was added to our database on Thursday 2 April 2020.

It may be a little hard to imagine, in 2012, that Great Britain was once filled with a plethora of aircraft manufacturers. 100 years ago, the seeds of many of them were being sown as the demand for aircraft gained pace following the outbreak of the First World War. Not all survived following the armistice and the subject of this bookazine, Supermarine, only kept going by the skin of its teeth then certainly did not settle into a profitable aircraft manufacturing business until the mid to late 1920s. However, with the genius mind of Reginald Joseph Mitchell on board, the company could do no wrong and without doubt, the company's most famous and well-known product was the Spitfire. The colossal orders received for the fighter set the company on a steady post-war course which, once again, was a period that saw other companies fall by the wayside. The Spitfire was not the company's only success story; the Southampton flying boat set the standard in the 1920s followed by the Walrus in the 1930s. The success achieved by the Schneider seaplanes also helped to confirm that the Mitchell touch was a winning formula. Following Mitchell's demise, we must not forget the man who carried the baton, Joe Smith, who developed the Spitfire and Seafire into a machine that remained in production for ten years, ultimately ending its service career in Korea. Smith, did not just ride on that back of Mitchell's designs and was responsible for the Spiteful, Seafang and the Attacker to name but a few. I hope this bookazine, the first in a series of British, American and German aircraft manufacturers gives the reader a brief insight into the aircraft produced by Supermarine and those that did not quite make it. Each entry gives a snapshot of information, broken down into development, design, operational service and production and includes technical panel.