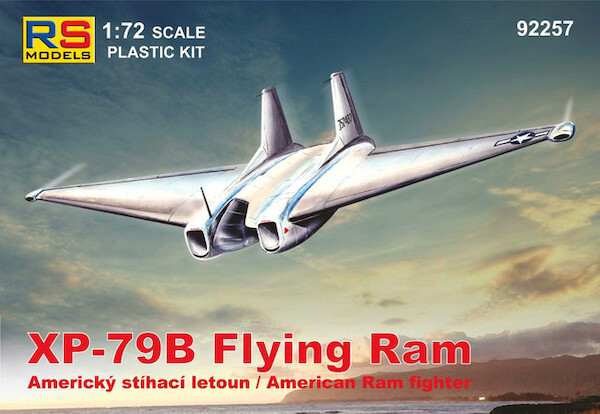 This product was added to our database on Thursday 11 february 2021.

The XP-79 it would be powered by tow XCALR-200A-1 rocket engines to give the plane an extreme climbrate to make it able to climb to 40,000 feet. At 40,000 feet the plane would dive into a formation of enemy aircraft at an estimated speed of up to 875 km/h and clip their wings or tail surfaces with its own reinforced wings, for this reason they gave the XP-79 the nickname: "Flying Ram".
The pilot would operate the aircraft from a prone position, permitting the pilot to withstand much greater g-forces in the upward and downward direction. The pilot controlled the XP-79 through a tiller bar and rudders mounted below; intakes mounted at the wingtips supplied air for the unusual bellows-boosted ailerons.
However, the rocket motor configuration using canted rockets to drive the turbopumps was unsatisfactory and the aircraft was, subsequently fitted with two turbojets instead.The XP-79B was lost on its first flight 12 September 1945. While performing a slow roll 15 minutes into the flight, control was lost for unknown reasons. Test pilot Harry Crosby attempted to bail out but was struck by the aircraft and fell to his death.