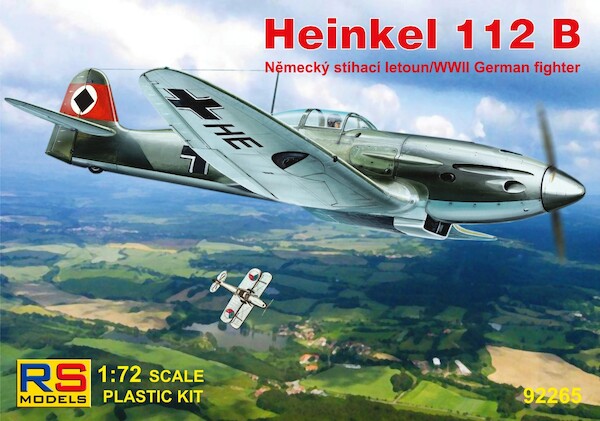 This product was added to our database on Sunday 23 May 2021.

Late in 1933 the RLM issued a specification calling for a momoplane fighter design.Four designs were produced : Arado 80.the Fw 159,the Bf 109 and the Heinkel 112.
The He 112 which was designed by Dipl.Ing Heinrich Hertel, completed with the other three at a competition held at Travemunde in October 1935.The product of the He 112A series was failured and Hertel undretook a complete structural redesing of the aircraft under the deignation He 112B.The first production prototype was the V9,which first flew in July 1937.The Japanese goverment placed an order for thirty He 112 during the autumn of 1937.The He 112B-0 had two 20 mm cannon in the wings and two 7,9 mm MG machine-guns mounted above the engine cowling.The first twelve aircraft were delivered to Japan during the spring of 1938,but a second batch of twelve,were hurriedly impressed into the Luftwaffe because of the Sudeten crisis.The machines were delivered to III/JG 132 at Furstenwalde,but following the signing of the Munich agreement,the fighters were returned to Heinkel for export and immediately offered the to Spain.The seventeen were delivered to grupo 5-G-5 in November 1938.When the Spanish civil War was ended,the fifteen He 112 B-0 were transfered to Spanish Maroco.Royal Rumanian airforce ordered early 1939 twentyfour aircraft of the improved B-1 series.The B-1series was powered by a 700 hp Jumo 210 G engine with direct fuel injection.Twelve aircraft were delivered to each of two unic,the 20th Squadron,engeged in the defence of Bucharest,and the 51th,supported the Rumanian army across Bessarabia from June 1941.By the middle of 1942,remaining He 112 had been relagated to training units.The last airarm to receive the He 112 was the Royal Hungarian Air Force which purchased thry He 112 B-1