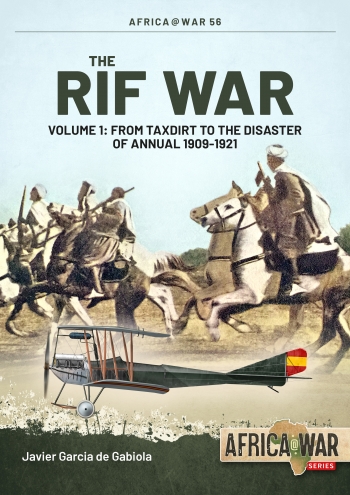 The Rif War in rugged northern Morocco is remembered for romantic films and novels about the French Foreign Legion, such as Beau Geste. In reality, the French intervention, although very important, was late and secondary in importance to that of the Spanish.

Spain, had been fighting in North Africa since 1909 in order to carve out new colonial possessions, in part at least to compensate for the recent loss of Cuba and the Philippines to the U.S. It was not an easy road however and Spain suffered disasters such as Barranco del Lobo and victories such as the cavalry charge in Taxdirt in 1913, and had had to face enemies such as Mizzian, El Roghi, or the famous El Raisuni. Abd-el Krim's revolt caused 8,000 Spanish deaths at Annual in 1921 in which much of the new colony was lost, at least temporarily.

The war also saw the Spanish army completely reformed, reaching new levels of effectiveness with the founding of the Spanish Legion and the recruitment of Moroccan soldiers of the Regulares. These troops, together with a plethora of commanders who made their combat debuts here, such as Franco, Mola, Queipo de Llano and Kindelán, would later fight in the Spanish Civil War. These commanders would be called the "Africanistas" and would constitute the hard core of the military that rose up against the government in 1936.

Volume 1 of Rif War examines the operations of both sides in North Africa between 1909 and 1921, up to the Disaster of Annual. Within are details of the Spanish army, its organisation, tactics and reforms to meet the needs of the theatre, the fledgling Spanish military aviation which claimed a number of world firsts in this campaign, and their North African auxiliaries and opponents. Rif War is illustrated with a selection of colour artworks and specially commissioned maps.

The Boeing B17 Flying Fortress in Foreign Service