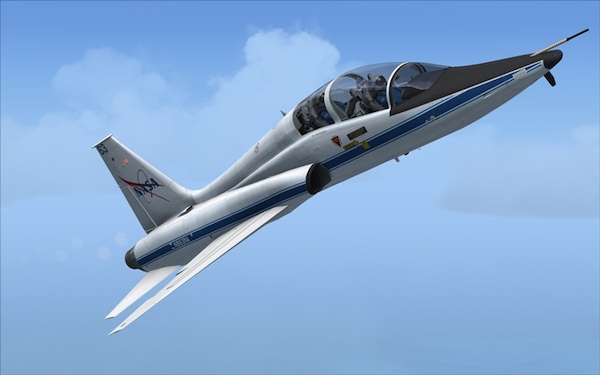 This product was added to our database on Wednesday 20 September 2017.

The Northrop T-38 Talon is a twin-engine, high-altitude, supersonic jet trainer. Adapted from an in-house lightweight fighter project (dubbed N-156F) that was aimed at the export market, Northrop was successful in the USAF competition to replace the aging T-33 trainer. The first prototype flew on 10 March 1959. Quickly adopted, it entered service in 1961. By the time production ended in 1972, 1,187 T-38s had been built.

Since its introduction, it is estimated that some 60,000 military pilots have trained on this aircraft! The USAF remains one of the few armed flying forces using dedicated supersonic final trainers, as most, such as the US Navy, use high subsonic trainers.

In 2003, 562 T-38s were still operational with the USAF and are currently undergoing structural and avionics programs (T-38C) to extend their service life to 2020. Improvements include the addition of a HUD, GPS, INS (Inertial Navigation System), and TCAS as well as PMP (a propulsion modification to improve low-altitude engine thrust). Many USAF variants (T-38A and AT-38B) are being converted to the T-38C.

Besides the USAF, USN and NASA, current T-38 operators include the German Air Force, the Republic of China Air Force, and the Turkish Air Force.

Introducing the Advanced Series T-38A Talon
Our original rendition of the historic and beloved T-38A is, in our opinion, a standout release for our simulation platforms. Very well received, with the stamp of approval from two real world T-38 pilots, we had spared no effort in attempting to create a near perfect rendition of the real aircraft. Hundreds of hours of testing and tuning a flight model created by a respected expert, faithful recreation of both the exterior and interior models, realistic texturing, along with a quality high definition sound set rounded out what we feel is one of our best products.
An Advanced Simulation

Our T-38A is about to steal your heart (or at least get it racing) all over again.
We are very proud to announce our advanced version of the T-38A, significantly raising the bar on what's possible in your simulator. This release represents one of the most accurate and detailed simulations of a military aircraft to exist within the MS Flight Simulator / P3D environment. The real life T-38A has played a key role in the training of decades of military aviators; we believe that our new T-38A will bring an in-depth yet enjoyable training experience to your desktop.
True Physics Engine

Designed by an aerospace engineer with extensive experience in the simulation world and collaboration in other famed titles, the new Advanced Series T-38A features a 100% custom physics and flight dynamics engine (FDE). Aside from bringing in a new level of accuracy in terms of flight dynamics modeling, it lacks the traditional and well-known MSFS / P3D FDE limitations.

The aerodynamic model for our T-38 is based on Northrop and NASA data. It includes wind tunnel and flight test data, in addition to other technical sources. The final flight model has been corrected and validated by a real T-38 instructor pilot. The engine dynamics and performance characteristics of the twin J-85 engines are accurately represented, as well as custom ground dynamics and structural modeling being included.

As result of the accurately modeled physics, our T-38A matches the figures available for the real aircraft in terms of flight envelope, fuel consumption (range/endurance) and energy manoeuvre diagrams.
Custom Flight Control System

Failure and Damage Modeling
A completely custom and very in-depth failure system has been created for the T-38A. The failures model affects a wide ranging array of systems, including the airframe, engines, landing gear, hydraulics, flight controls, and the Stability Augmentation System. Forced or random failures are possible, with random failure probabilities adjustable to realistic values based on actual T-38 fleet maintenance data.

Damage is also possible due to exceeding real aircraft operating limitations. Icing is another source of possible damage, with possible engine damage occurring from flight into known icing conditions without anti-ice systems active, causing ice accrued on the engine intakes detaching and being ingested by the compressor. Ice may also accrue on the airframe, causing a degradation of handling qualities and performance. Last but not least, possible bird strikes may occur based on real data for military aircraft, with damage severity and systems affected based on a probabilistic system.
Accessible Complexity.

Advanced though it may be, with all of its in-depth features and custom systems, it's worth remembering our T-38A is still a simulation of a very well regarded training aircraft. The key qualities that have made the real T-38 such an important part of military training since 1961 are very well represented in our model. It's not an overly complex, nor a difficult airplane to fly, yet it rewards a steady and disciplined focus by its pilot.

Unlike a study simulation of a combat aircraft, there is nothing beyond flight in the T-38A to manage. No radar, no HUD, no weapons systems. Once this jet is learned, being fast, light and nimble, it lets you focus simply on flying. And as every real world T-38 pilot will attest to, the art of flying in a T-38 is truly an enjoyable experience.
New! MVAMS Updating Capability.

As of August 2017, our innovative MilViz Aircraft Management System (MVAMS) is now included with the Advanced Series T-38A Talon.

Our MVAMS utility runs outside the simulator providing the means to incrementally update individual products to quickly address issues and make fixes when required, without having to have our customers download and reinstall new versions of the aircraft. This allows our customers to quickly discover and install any pending updates for their aircraft, ensuring that they are completely up-to-date with our latest fixes, changes, or technology.
New! Prepar3D V4 Compatibility.

As of August 2017, the MilViz Advanced Series T-38A Talon has been updated for full compatibility in Prepar3D Version 4!