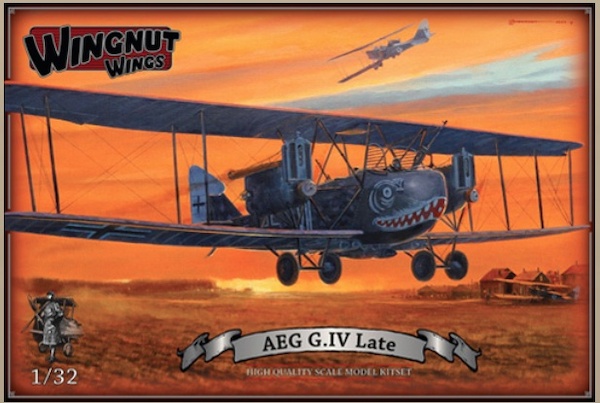 AEG G.IV (Late) Released on 27 February 2015 - 5 high quality Cartograf decal sheets including markings for 5 aircraft and 4 sheets of night lozenge - 410 high quality injection moulded plastic parts - 2 highly detailed Daimler-Mercedes D.IVa engines which can be displayed exposed or fully enclosed in their nacelles - Optional bomb load of 12.5kg (x26), 50kg (x7) and 100kg (x2) bombs - Optional propellers and weighted tyres - Tail skid trolley for diorama display - 17 photo-etched metal detail parts - Fine in scale rib tape detail - 57cm wingspan - Full rigging diagrams
Less famous than the Gotha G.IV, the 520hp AEG G.IV (Allgemeine Elektricitäts-Gesellschaft Grossflugzeug 4) tactical and strategic bomber was nevertheless able to carry a heavier bomb load and was considered to be the easiest to fly of all the German First World War bombers. Twin engine German bombers like the AEG G.IV evolved from an early concept that heavily armed twin engine Kampfflugzeug (battleplanes) were the way to fight in the air. As a result of this the sole 200hp AEG K.1 (later re-designated G.1), subsequent 300hp AEG G.II of 1915 and, to a lesser extent, the 440hp G.III were primarily used as heavily armed escorts for two-seat reconnaissance and bombing aircraft from late 1915. In mid 1916 a report came out that concluded, correctly, that lighter more agile single seat fighters were better suited to this task and the role of the G type aircraft was fully transitioned to that of bombing.

The prototype AEG G.IV rolled out in September 1916 followed by the first production machines in January 1917, but it wasn't until after the middle of 1917 that they were available to front line units in significant numbers. Initially employed for daylight tactical and strategic bombing this was changed to night operations following substantial losses due to enemy action. Similar to its AEG predecessors the G.IV featured a sturdy welded steel tube frame fuselage, tailplane and certain parts of the wings and proved popular with its crews. All struts and wing spars were also made from steel tube. The nose was covered by moulded plywood with the rest of the fuselage, tailplane and wings covered with fabric. The crew of 3 consisted of a rear gunner, pilot and commander. A fold away seat was positioned to the right of the pilot for the commander to sit in during take off and landing to prevent him being crushed in the almost inevitable nose over accident. Up to 3 Parabellum machine guns could be carried with 1 positioned in the commander's 'Kanzel' (pulpit) and 2 for the rear gunner, one of which was fitted to the floor and fired through a trapdoor in the bottom of the fuselage. On night operations the crew was frequently reduced to 2, with the rear gunner's position only fitted with a single gun firing through the bottom of the fuselage. Two 260hp Daimler-Mercedes D.IVa engines were positioned in nacelles between each wing which enabled the AEG G.IV to lift upwards of 800kg of bombs which were carried both internally and externally. By comparison the similarly powered long range Gotha G.IV had a maximum bomb load of only 600kg. An early variation of the AEG G.IV was the G.IVb which had extended 3 bay wings with additional ailerons on the bottom wings which was intended to carry a 1000kg bomb. The later G.IVb-Lang featured an extended fuselage, biplane tailplane and two 300hp BuS.IVa engines which formed the basis for the AEG G.V that went into production in August 1918. Another development was the G.IVk armed with 20mm Becker cannons for attacking ground targets which featured armoured crew positions and engine nacelles. Only 5 AEG G.IVk were produced and none are thought to have seen active service.

Early production AEG G.IV had their rear internal PuW bomb racks paired on the port side of the fuselage in the rear gunner's cockpit while later machines had one mounted on each side of the fuselage. Early aircraft had their Parabellum machine gun mounts roll along rails fixed around the cockpit openings while later aircraft were fitted with rotating gun rings. Very early G.IV had smaller rounded rudders which proved to be ineffective and were replaced by a larger, more triangular, version shortly after they entered service. Like many other night operated aircraft the AEG G.IV suffered from a very high attrition rate due to landing accidents and production could never quite keep up with the demand for replacement aircraft. Any history of this important aircraft here is of necessity very brief, therefore we encourage you to seek out the references mentioned below for a more thorough understanding of this important aircraft.

WW1 colour schemes are contentious at the best of times and we have done our best to provide what we consider to be accurate painting information for this model. The various camouflage schemes and personal markings applied to German aircraft of the Great War have attracted more than their fair share of debate over the years and, while we have been as meticulous as we could be, I'm sure some will not find our choices to their liking. Photographic evidence indicates that AEG G.IV from the 1st production batch were finished in 4 camouflage colours thought to be light green, dark green and dark brown (or mauve) with the undersides painted light blue. Following the move to night bombing in mid 1917 the light blue undersides had a dark 'squiggly' camouflage applied at the units. Aircraft from the 2nd and 3rd production batches were delivered with large hand painted hexagons in dark blue, green, purple/mauve and black which were frequently overpainted with grey-green paint applied in a stippled or scumbled finish carefully avoiding the black hexagons. There is also evidence of the hexagons on some aircraft being darkened further with an application of a very dark stippled/scumbled paint and/or tinted varnish which has also been noted as being sprayed over the nose hexagons leaving a mottled finish. From the 4th production batch onwards AEG G.IV were covered overall with dark lozenge fabric, the vast majority of which was of the 5 colour pattern with only a few instances of 4 colour being noted. It is entirely possible that some of this material was simply the day colour fabric dyed or overpainted with darkly tinted varnish or dope. Existing samples of dark night lozenge fabric salvaged from AEG G.IV 574/18 show evidence of being treated to a dark black-green tinted varnish which also covered the very dark blue rib tapes, giving an overall dirty black-green finish almost completely obscuring the printed colours of the fabric. Clarification: some people have misunderstood this to mean that the fabric salvaged from AEG G.IV 574/18 was day lozenge covered with a dark black green varnish. This is not correct. The dark night lozenge fabric salvaged from AEG G.IV 574/18 is specifically dyed in dark night lozenge colours, very different to the day lozenge colours (please see the photos shown on pages 9 and 28 of these instructions). Further to this, the specific dark night lozenge colours have been darkened even more with an application of dark black green varnish. Rib tapes have also been noted in natural linen.