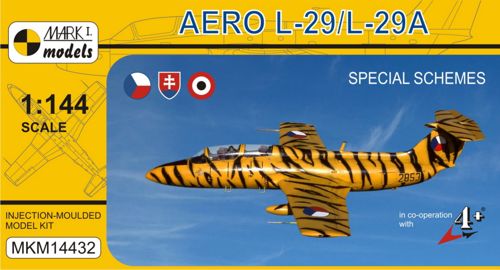 This product was added to our database on Friday 17 October 2014.

Aero L-29A Akrobat and Special schemes. The L-29 Delfin (NATO code Maya) was a basic, intermediate and weapons training jet aircraft developed by the Aero Vodochody company in Czechoslovakia early in the 1960s. It was a two-seat, all-metal monoplane powered by a Motorlet M-701 turbojet engine.
The sturdy L-29 became the standard military training type of the Eastern Bloc air forces (except Poland) and it was also exported to the Middle East, Asia and Africa. More than 3,600 Delfin trainers had been built by 1974, testifying to the type's timeless design.
In 1967, a dedicated single seat aerobatic version was developed as the L-29A Akrobat, wearing special livery, while some other military two-seaters also wore highly conspicuous but interesting anti-camouflage schemes.

This injection-moulded kit contains 29 parts and one clear part (the cockpit canopy).
A comprehensive decal sheet is included.