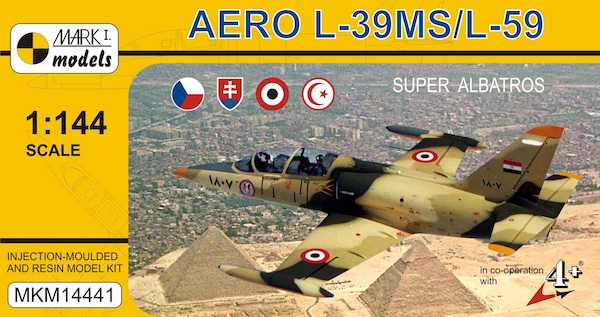 This product was added to our database on Friday 29 May 2015.

The L-39 Albatros, a high-performance second-generation jet trainer, was developed by the Aero Vodochody aircraft company in Czechoslovakia during the 1960s. Becoming the most widely used jet trainer, until today about 2,800 L-39s and its variants have served with more than thirty air forces around the world. A modernisation programme of the L-39 was started in the early 1980s, resulting in the L-39MS (export designation L-59), featuring a strengthened fuselage with a longer nose, an updated cockpit with advanced avionics and a more powerful engine. The L-39MS prototype flew in September 1986.
It is a two-seat, all-metal monoplane powered by a Lotarev DV-2 turbofan engine. Except its original role as a trainer it can also be used as a light attack aircraft, fitted with a GSh-23 cannon pod under the fuselage.
The L-39MS/L-59 production was under way in the period 1986-96 and totalled 71 aircraft, including 5 prototypes. Six machines were delivered to the Czechoslovak Air Force, while 48 aircraft were sold to Egypt (during 1993-94) and 12 to Tunisia (1995-96).
Colour schemes included in the kit:
1) Aero L-39MS Super Albatros, Black 0006, 1st Training Regiment, Czech Air Force (letectvo Armády Ceské republiky), Prerov Air Base, 1993
2) Aero L-39MS Super Albatros, Black 0003, 1st Training Flight, Air Force Academy, Slovak Air Force, Košice Air Base, 1999
3) Aero L-59E Super Albatros, Black 1807, 88th Squadron, Egyptian Air Force, El Minya Air Base, 1993
4) Aero L-59T Fenec, Black Y95063/JG, 16th Squadron, Tunisian Air Force, Gafsa Air Base, 2008

Contrary to the previous Aero L-39 kits, this model includes resin fuselage parts (plus some other small ones) to reflect this variant’s differences (new fuselage shape and new horizontal surfaces). The cockpit canopy is made using vacu-formed technology (made by Rob Taurus).