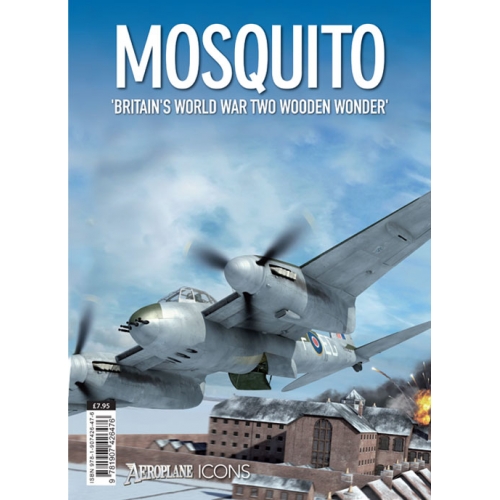 This product was added to our database on Thursday 22 May 2014.

UNDOUBTEDLY one of the greatest and most versatile aircraft of the Second World War, the Mosquito was also the world┬'s fi rst true multi-role combat aircraft (the second not arriving until the Panavia Tornado). Designed by a company with no previous experience in producing high-performance military aircraft, de Havilland managed to produce a timeless classic which will remain one of those spine-tingling machines now sorely missed in British skies. However, while I write these words, far away in New Zealand, the sound of a pair of Merlin engines in harmony is to be heard in the skies once more, as Jerry Yagen┬'s long project (Canadian-built FB.26 KA114) is now back in the air.

The Mosquitoes versatility during the Second World War saw the aircraft operating in a variety of roles including as a pure unarmed bomber, a heavily armed fighter-bomber, rocket and heavy cannon armed anti-shipping aircraft, radar equipped night-fighter, an unarmed reconnaissance aircraft, meteorological, trainer and finally as a target tug. From the PR.1 to the T.43, there was not a role the Mosquito could not be adapted to carry out; the aircraft was even modified for light transport work both during and after the war.

What also set the Mosquito apart from the rest was that it performed every role well. The combination of a superb aircraft and a good crew, of which there were many, saw the Mosquito reach legendary status during its service; this was not an accolade that was placed upon it by post-war historians. The raids that the Mosquito took part in broke all records for distance, time and bomb load, not to mention the accuracy with which they were delivered. Flown by RAF and Commonwealth crews in the skies over Europe, the Mediterranean and the Far East, the Mosquito was a vital cog in the machine that achieved victory against the Axis powers.

The vast bulk of Mosquitoes were built in Britain, but mention should also be given to the aircraft built in Australia and Canada which contributed to the grand total of 7,781 built. Built in 40 different versions, the Mosquito remained in production from August 1941 through to 1950. It would take something very special to replace the Mosquito in the RAF inventory but luckily another classic came along to take over the reins in the shape of the Canberra, an aircraft which adopted the basic design principles of the de Havilland bomber in more ways than one.