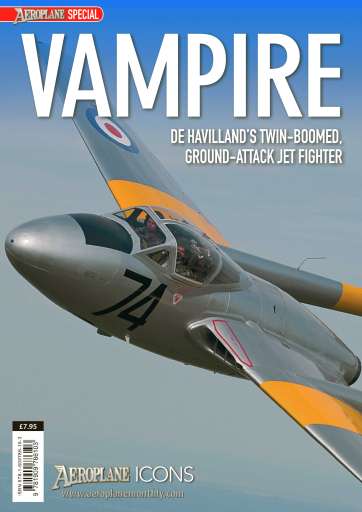 This product was added to our database on Thursday 22 May 2014.

Vampire - De Havilland's twin-boomed, ground-attack jet fighter Often overlooked completely in the grand history of aviation, the Vampire has always been overshadowed by the Gloster Meteor with no prize awarded for becoming the RAF's second jet fighter. As the DH.100 Spider Crab, the unorthodox looking little fighter was in fact Britain's third jet to fly, Gloster also claiming the glory with the E.28/39. The Vampire did take the honour of becoming the RAF's first single engine jet fighter and for a short period of time the F.1, with a top speed of 540 mph at 34,000ft, was the fastest. The early design trend opted for a pair of jet engines owing to the lack of power the early units were producing and their lack of reliability. Once harnessed and fine-tuned, the jet engine quickly became a very reliable and powerful form of propulsion, especially the later versions of the de Havilland Goblin, which gave pilots increased confidence in the aircraft. Below the surface of the Vampire's unique appearance was an aircraft that was easy to fly, easy to maintain and easy to build at home and under licence abroad, where it achieved unprecedented orders from the moment it first appeared in RAF service. After entering service too late to see action in the Second World War, the Vampire remained at the forefront of RAF operational squadrons until the early 1950s while the T.11 continued on in the advancing training role until the mid-1960s. The story of the Vampire cannot be told without including the Venom and Sea Venom which were developments of the original aircraft but redesigned to such an extent that they warranted a new company designation and name. Quite different machines in their own right they continued the philosophy of a short pod-type fuselage and twin-boom layout which continued, albeit in larger form, with the design of the Sea Vixen.