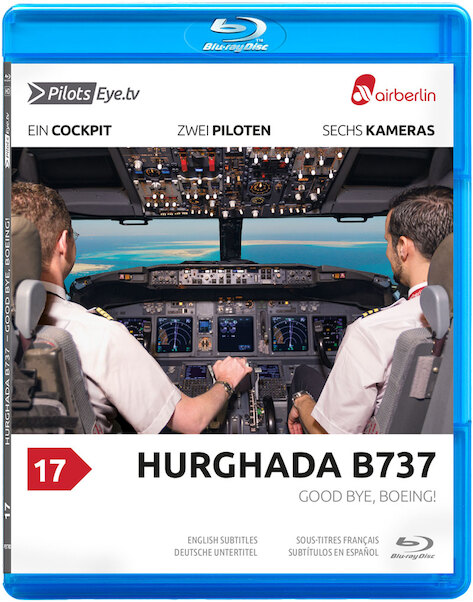 This product was added to our database on Wednesday 6 April 2016.

PilotsEYE.tv's 17th episode – airberlin "Good Bye, Boeing! – Phased out" – showcases the end of an era, as the world's most produced airplane, the legendary Boeing 737, embarks on one of its final flights for Air Berlin.

Reason for this 'Goodbye-Trip' is the impending decommission of Air Berlin's fleet of Boeing aircraft, after which the German Airline's passengers will be carried exclusively by Airbus.

The journey takes the crew from Bavarian capital Munich (RW08R) to the Red Sea's most popular seaside resort, Egypt's Hurghada (RW34). Together with flight captain Florian Deiters, fleet manager and first officer Michail Tounas demonstrates not only their flawless handling of the plane, but also a profound knowledge of its technical intricacies. On the day before take-off, they both take the time to visit their designated plane (D-ABMP) and explain some of the most interesting changes the venerable 737-800 has undergone during its almost five decades of service.

Bonus feature to the 90 min main film – in addition to the usual detailed technical explanations from the cockpit – is a "portrait of a pusher", a day in the life of a pushback driver at Munich Airport. Gerhard Ruhland has, literally, led a moving life. An employee of Munich Airport for over 25 years, Gerhard pushes and pulls airplanes – of up to 550 tons – around the runway apron and presents a few uniquely interesting – and for passengers normally inaccessible – perspectives of "his" planes.

On this latest PilotsEYE.tv venture the filmmakers found themselves in a very tight spot – namely, the quite small cockpit of the 737. Never before have 10 cameras been deployed in such a limited space, but as it's one of the prerequisites for the authenticity and intimacy of PliotsEYE.tv productions, the crew lived up to the challenge.

The film is scheduled to release by the third week of March, available on DVD and Blu-ray. Featuring subtitles in German, English, French and Spanish. Region free on both disc formats, DVD: 576i50 / Blu-ray 1080p24. All flight related files, including handwritten logs, as well as the most breathtaking pictures are once again available for a free download at PilotsEYE.tv.