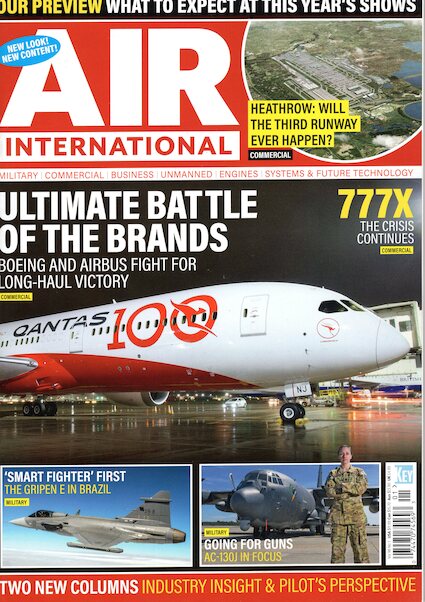 This product was added to our database on Friday 17 January 2020.

AT THE CONTROLS
Air International columnist Dave Unwin talks about the recent developments in hybrid and electric aero-engines.

HIGH-FLYER – DIVERSITY IN AVIATION
L3Harris's Jo Hjalmas and Colin Rydon say a diverse and collaborative focus is needed to develop the pilots of tomorrow.

EUROFIGHTER
Jon Lake explains how an electronic warfare role could provide an invaluable boost to the Eurofighter programme as production begins to wind down.

MACEDONIAN POLICE AT 50
Igor Božinovski provides an overview of North Macedonian Police Aviation, which has just celebrated its 50th anniversary.

LOUT
Airbus Defence and Space has revealed its once highly classified Low Observable Unmanned Testbed (LOUT). Jon Lake was there for Air International.

SURPLUS MILITARY AIRCRAFT
From second-hand fighters to tankers, Jamie Hunter and Khalem Chapman look at the rising trend in the procurement of surplus platforms over commercial off-the-shelf alternatives.