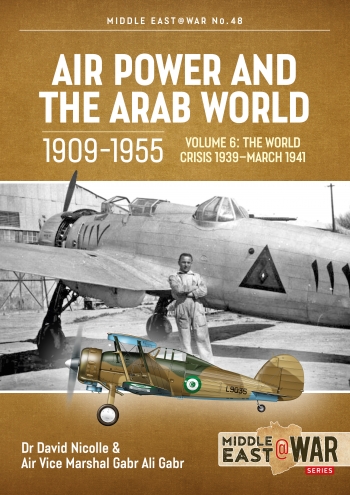 This product was added to our database on Thursday 11 August 2022.

Volume 6 of the Air Power and the Arab World mini-series continues the story of the men and machines of the first half century of military aviation in the Arab world. These years saw the Arab countries and their military forces caught up in the events of the Second World War.

For those Arab nations which had some degree of independence, the resulting political, cultural and economic strains had a profound impact upon their military forces. In Egypt the Army generally remained quiet, continuing with its often unglamorous and little appreciated duties. Within the Royal Egyptian Air Force (REAF), however, there were a significant number of men who wanted to take action in expectation of what they, and many around the world, expected to be the defeat of the British Empire.

The result was division, widespread mistrust, humiliation, and for a while the grounding of the entire REAF. In Iraq the strains of the early war years sowed the seeds of a yet to come direct armed confrontation with the British.

Volume 6 of Air Power and the Arab World then looks at the first efforts to revive both the REAF and the Royal Iraqi Air Force (RIrAF), along with events in the air and on the ground elsewhere in the Arab world from 1939 until March 1941.

This volume is illustrated throughout with photographs of the REAF, RIrAF and RAF and a selection of specially commissioned colour artworks