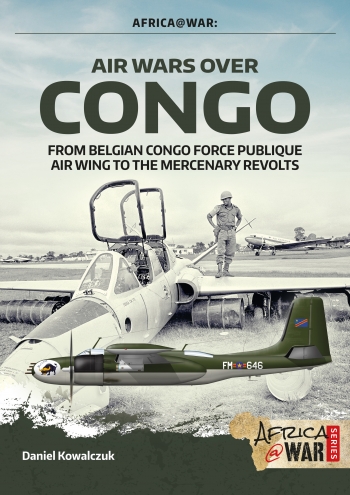 Share this product
Also in this series:
9781911628644Helion & CompanyBooks on aviation / War in Africa
Product description

Ever since the Democratic Republic of the Congo (DR Congo, or DRC) was released into independence by Belgium, in June 1960, its skies have been full of action. During the crisis, and immediately afterwards, the Belgians evacuated their colonists and military personnel. Hardly was this action was over when the mineral-rich province of Katanga attempted to break away and the separatists created their own air force, the Force Aérienne Katangaise (FAK), which existed from 1960 until 1963 and saw action against forces of the United Nations (UN). In line with decisions by its members, the UN deployed contingents from several air forces of its member states to protect the integrity of the DR Congo and eliminate the FAK. In response to the emergence of leftist insurgencies, the CIA created the Congo Air Force (or Force Aérienne Congolaise), staffed entirely by foreign mercenary personnel due to the lack of native pilots and mechanics. In 1964-1965, this service saw action during the so-called 'Simba Rebellion', in eastern DRC, and in support of government and mercenary forces. In 1964, the Belgians launched their daring operation 'Red Dragon', during which their Parachute Regiment was deployed to liberate hostages held by the Simbas in Stanleyville. Finally, in eastern Congo in 1967, the former 'brothers-in-arms' – including pilots of the FAC – fought each other during the famous mercenary mutiny. From the existence of a colonial air force attached to the Belgian military and civilian colonial administration during the time before Congo's independence (June 1960), to the involvement of the Central Government Congo Air Force in fighting against mercenary mutinies in Eastern Congo (1966-67), Volume I of "Air Wars over The Congo" provides detailed coverage of the aircraft and air forces involved in an entire series of conflicts in this huge country. Illustrated with over 100 photographs, 15 colour profiles and half a dozen maps, it offers a unique source of reference for enthusiasts and professionals alike.