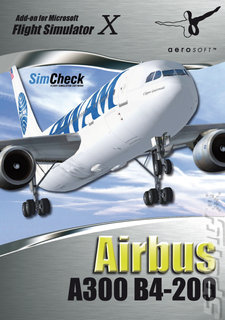 An Airbus classic! Building a state-of-the-art aircraft simulation for FSX is not for the faint hearted. It takes skill, knowledge and a lot of patience. The external model and virtual cockpit incorporate the latest modeling developments in animation, reflection and lighting built into the FSX simulator engine.

The A300B4-200 series is a first generation Airbus with analogue steam-gauges and a (for that time) advanced autopilot. Some of the current operators have made cockpit upgrades based on various GPS systems where the ADI was replaced with an EADI, the HSI replaced with an ND, the CDU replaced with a (basic) FMS. We have not simulated these upgrades as they were not included in the original aircraft! Because the Airbus autopilot systems are so different from the FSX implementation of an autopilot we decided to reinventing the autopilot from scratch. We send commands to the elevator trim and elevator trim to control the attitude and bank angle of the aircraft based on so called PID controllers.

This results in very realistic autopilot behavior. We did the same thing with the autothrottle, so don`t be amazed if the aircraft is not able to maintain the correct airspeed in turbulent air. Do as the real pilots do: turn off the autothrottle and switch to manual control !

This aircraft was developed in cooporation with real pilots, the training department of a major cargo operator flying the A300 and based on experience in the full motion A300B4-203 simulator at Brussels Airport, Belgium and will be distributed by Aerosoft in boxed format. Below are some highlights of the SimCheck A300B4-200 simulation...

Panel:
Complete captains and first officer panel with independent gauges (except altimeter) Independent standby altimeter GPWS simulation with 6 modes TCAS panel with realistic TA (RA not simulated as that doesn`t make sense in FSX since there is no communication between aircraft!)
Comms panel with 2 independent NDB`s.

shutdown times Hydraulics panel with realistic use of hydraulics fluids and linked to the correct flight control surfaces Pneumatics, packs, cabin temperature control and cabin pressurisation control with realistic simulation (e.g. open the door end the temperature will change depending on the external temperature, cabin differential pressure based on standard atmoshere + correction for actual conditions) Electrics panel with separate AC and DC system
Autopilot and autothrottle based on PID controllers working like the real thing, no FSX standard autopilot nor autothrottle used ROLL and PITCH modes are simulated: enter a roll and the aircraft will maintain the current bank angle (bank is automatically limited to 25°, bank angles < 5° will have the aircraft level the wings), set the aircraft to a certain vertical speed and the aircraft will maintain the vertical speed Realistic N1 limit computer
Settings panel with 4 predefined panel states, performance calculation (optimal/maximum levels based on gross weight), ability to call fuel truck, jetway etc...
Fully featured overhead panel with, amongst other things, Yellow Accu Pressure

you want, not the attitude FSX "thinks" you want...
All panel settings are saved between sessions based on the name of the currently loaded flight. Saving a flight "in flight" is not a good idea however, flights should best be saved before take-off our after landing. In total around 400 variables are saved between flights...
Dragable speed bugs on the 2D panel
Dragable altitude bug on the 2D panel
GDI+ based airspeed indicator, RMI, ADI and HSI for smooth and accurate needle movements

Flight model:
Realistic flight handling tested by a professional A300 Captain
Realistic engine performance in flight
Realistic fuel use during flight but also during start-up and taxi
Realistic braking performance

Limitations:
Because we hardly use any default FSX variables and controls, shared cockpit is not supported
No FS9 model is planned at this time
INS does not have an MSU, no VOR updating or drift
We have decided not to add a weather radar as FSX does not provide detailed enough information to make a radar that has any real use
Panel will only work with (a very recent) FSUIPC installed