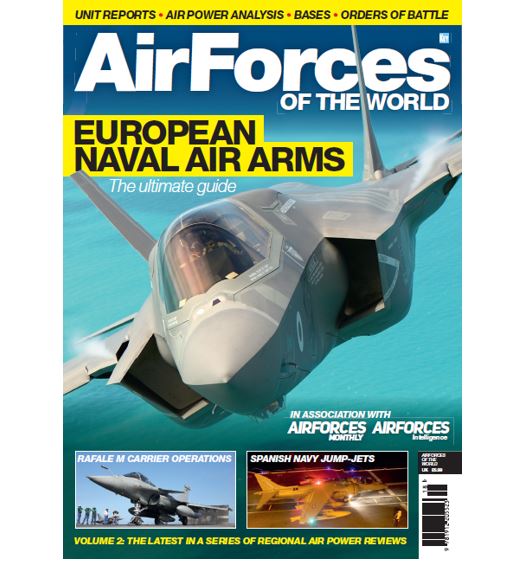 This product was added to our database on Thursday 27 September 2018.

The 2nd edition of AirForces of the World, from the makers of AirForces Monthly and AirForces Intelligence, brings coverage of Europe's naval air power.  From carrier-based fast jets to fixed-wing maritime patrol aircraft and helicopters, the region's maritime air components are reviewed in detail in this 100-page special publication, with extensive orders of battle for every flying unit.  Our correspondents also profile a select group of naval air forces squadrons and missions ? in Eastern and Western Europe ? with profiles of individual aircraft types and units. Lightning looks to the future

The first F-35Bs for No 617 Squadron 'Dambusters' have arrived ? the opener in a comprehensive strategy to establish an impressive new maritime expeditionary air power potential for the UK.

UK carrier air power rebornThe UK was left without an aircraft carrier following the decommissioning of HMS Illustrious in August 2014.  But now, with the arrival of the Queen Elizabeth class, the UK is back in the carrier business.

Wind across the wavesThe introduction of Dassault's Rafale M fighter in 2000 changed the face of French carrier operations.  An evaluation of France's omni-role fleet fighter.

Cavour's Harriers in actionAirForces of the World was granted exclusive access to the aircraft carrier Cavour to report on the current activities and future prospects of the Italian Navy's fixed-wing component.

Wildcats on the prowlHighly capable, specifically designed to operate in the harshest maritime environments and deadly to its enemies ? the Royal Navy's Wildcat helicopter is a quantum leap compared with the Lynx it largely replaced.