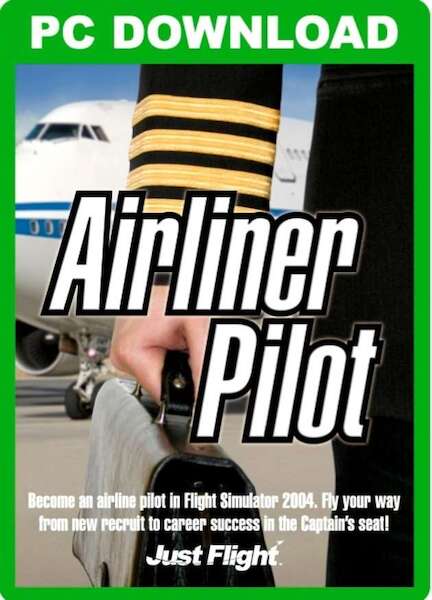 The popularity of Virtual Airlines demonstrates that many flight simulation enthusiasts want to enjoy the whole commercial aircraft experience - not just piloting a plane from A to B. Up to now there's been nothing to replicate airline operations, but Airliner Pilot is a unique expansion for FS2004 that fills this gap. You begin your Airliner Pilot career at the heart of a fictional airline and start as a Junior First Officer in the right-hand seat of a turboprop aircraft. Flying your way through the program, you work your way through a pilot's career. The airline will assign routes for you to fly according to rank and aircraft allowances - and, if successful, you finally achieve the coveted left seat!

This product was the Winner of Aircraft Illustrated's prestigious award for Best Flight Sim Product of 2005. They wrote: "This creates a whole new challenge for users of Flight Simulator. It is great fun, easy to use and one of those titles that you find yourself going back to time and again, which is a sign of a great product. We were also very impressed with the rapid response from the publisher when needing help and Airliner Pilot even has its own web site, www.airlinerpilot.com, where fans are adding their own extras to make the experience even more enjoyable."

Have you ever wanted to fly for a major airline? Fancy travelling the world, being responsible for millions of pounds worth of material and for the safety and comfort of hundreds of passengers? Wouldn't it be great if you could do it in FS2004?

Now you can. Airliner Pilot is a unique piece of software that puts you in control of an airliner in your own fictional airline. Starting as a Junior First Officer in the right-hand seat of a turboprop aircraft, you'll make your way through a pilot's career.

Your airline will assign you routes to fly according to your rank and aircraft allowances. With growing experience and successful flying you will gain type ratings for larger aircraft on longer routes and eventually be promoted to take the Captain's place in the left-hand seat.

The pilot will be promoted when he or she successfully completes a number of flights and a number of flying hours. The hours are determined according to which options you choose.

Custom airline design - the program allows fictional airlines to be used in order to create an individual airline for each player. The user can enter a name for his airline.

Flights will be assigned by the Flight Ops program according to a pilots experience and aircraft type ratings. There are about 1,500 individual pre-planned flights worldwide, from regional to intercontinental - more flying than anyone will ever want!

Briefings include full route details including navigation aids, fuel load required and weather reports, along with all the necessary information included to successfully complete the flight. Briefings can be printed out. The player can fly the routes under FS ATC guidance. Route Tracker monitors the progress of your flight from start-up to shut-down and looks and works like a mini FMC (Flight Management Computer).

In addition the Route Tracker will track your flight for accuracy on departure time, waypoint accuracy, correct altitudes, abnormal flight envelope departures such as excessive 'G' or stalling, arrival time, engines off time, and after completing the flight the Tracker will pass back the results to the Flight Ops program for evaluation and assessment. To consider a flight as successful, the player will have to match the set times and fly the aircraft and route correctly with regard to the difficulty levels and tolerances that have been set.