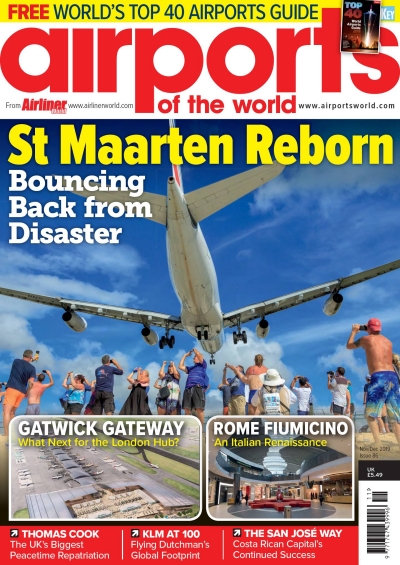 News
Airports of the World's comprehensive coverage of worldwide news, including El Al's global growth, Farnborough's new owner, a possible runway resolution at Gatwick, the A380's Egyptian debut, a Bangladeshi boost for Manchester and the opening of Beijing's new hub.

Gateway to the Goldfields
Almost 400 miles east of Perth, Kalgoorlie-Boulder offers lifeline services to those who live and work in the mineral-rich region. Chris Frame travelled to the remote facility to find out more about the airport and the work of its Royal Flying Doctor Service outpost.

Dade County Delights
Regular contributor Tom Singfield presents a selection of his images from Miami International Airport, focusing on an apron tour and shots from the perimeter fence.

The Smart Alternative
Sebastian Schmitz reports from Bavaria's Nuremberg Albrecht Dürer Airport, which champions itself as an alternative to larger hub facilities in cities such as Frankfurt and Munich.

From Schiphol to the World
As KLM Royal Dutch Airlines marks its 100th birthday, Ron Mak delves into the archive and uncovers a fascinating selection of historical images from the carrier's Amsterdam home and further afield.

The World's Top 40 Airports
Using data from Airports Council International (ACI's) ranking of more than 1,200 facilities across the globe, we reveal which hubs have made the exclusive top 40 list and provide all the vital statistics.

Repatriation Round-up
A vast effort to return holidaymakers affected by Thomas Cook Group's collapse has seen swathes of lesser-seen aircraft making impromptu appearances at airports across the UK and beyond.

The Rise and Rise of Gatwick
London Gatwick Airport has come a long way since opening as an aerodrome in the late 1920s. Lou Jones charts the history and operation of the dual-terminal site.

Bouncing Back
Three hurricanes battered the island of St Maarten in 2017, damaging core infrastructure including its famous Princess Juliana International Airport. Now, following a period of rebuilding and restructuring, the Caribbean complex is returning to business as usual.