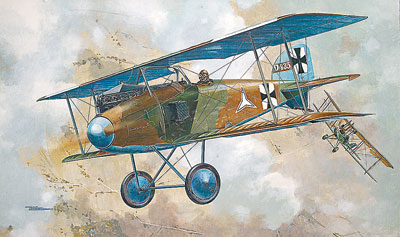 The Albatros D.I reached a height of 4,000 meters during testing, in only 22 minutes, quicker than any other fighter. The speed and maneuverability of the new machine were more than satisfactory and it is not surprising that this development by designer Robert Thelen was viewed by the military as a great encouragement. In July of 1916 Idflieg recommended that the Albatros D.I be put into production. The order was for 50 machines, which was then the normal practice for the German Army; any new development was ordered in limited quantity (20-50 units), and its initial operational experience, and any failures, gave some guidance to the constructor as to the necessity for any improvement of the design, or else led to an increased order for the existing design.
Series production Albatros D.I's were given the serial numbers D.422/16-471/16. Taking into account the obvious success of the fighter, Idflieg issued an order for a second batch with the following numbers: D.472/16-521/16. However, production of the Albatros D.I remained in number only 50 machines, because a more modern version was ready; the Albatros D.II, which replaced it in the second batch.
The appearance of the Albatros D.I at the end of the summer of 1916 was a nasty surprise for the British and it was clear that their de Havilland DH2 had immediately lost its advantage. Allied aces such as James McCudden noted the outstanding capability of the Albatros D.I and gave due respect to its fighting prowess in the air.
In the fall of 1916, Jasta 2 under the command of famed ace Oswald Boelcke forced the air arms of the opposition to set about improving their own equipment. The active service of the Albatros D.I was quite short, because already at the end of 1916 it was being supplanted by the more modern Albatros D.II. However, some of the machines from the 50 produced in total, survived to the last year of the Great War as training planes.
Markings for 4 machines:
Albatros D.I (D.426/16), Lt. Günter, Jasta 2. Western front, Berthincourt, Autumn 1916.
Albatros D.I (D.435/16), Lt. Spitzhoff, Jasta 5. Western front, Autumn 1916.
Albatros D.I (D.390/16), Lt. O.Höne, Jasta 2. Western front, Berthincourt, Autumn 1916.
Albatros D.I (w/n unknown). Flown by Rittmeister Prince Friedrich Carl von Preussen,
FlAbt(A)258. Western front, March, 1917.