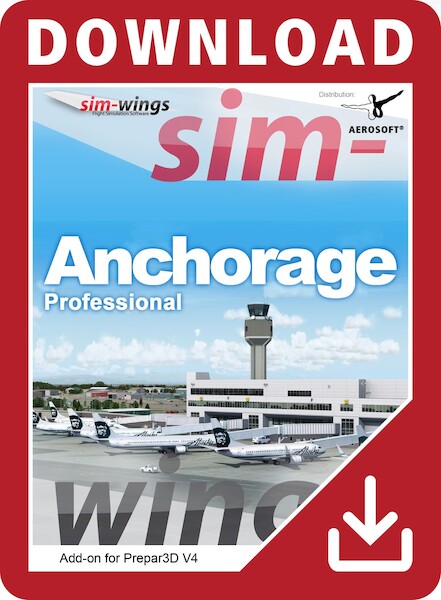 This product was added to our database on Wednesday 10 January 2018.

Product information:
"Anchorage professional"Anchorage Ted Stevens International (PANC) the most important airports in Alaska and a destination of many national and international connections. It is a hub for Alaska Airlines and an important cargo airport located conveniently between the USA and Asia. This paradise for aircraft enthusiasts and pilots is now, finally, available for Prepar3D V4 as well! There probably is no place on the globe where aviation is as important as in Alaska. In this great state roads are scarce and limited to the major cities.

The vast wilderness can only be reached by aircraft, often only by floatplane or small aircraft equipped for off-airport landings. And Anchorage International Airport 'Ted Stevens' is at the centre of much of this aviation.Add the violent weather and the long hours of darkness in the winter and you end up with an airport that is in every way remarkable and well worth a superb rendering for Flight Simulator.

Lake Hood: Right next to PANC, via a taxiway connection crossing several streets, you can find Lake Hood the largest seaplane base in the world. During summer, up to 800 seaplanes arrive and depart here per day, bringing anglers, backpackers, and other visitors into all regions of Alaska. Quite a lot of guided tours also begin here.

Z41: Next to Lake Hood there is a dirt strip "Z41" used by aircraft that have tundra equipment attached (special wheels to enable landing on unpaved strips in the wilderness).

Ground layout including detailed aerial image according to P3D V4 SDKDetailed recreation of Lake Hood (LHD), the world's busiest seaplane base, incl. lots of static aircraftConfiguration tool to enable or disable features like vehicle traffic and dynamic lightingCompatible with FTX South Alaska (compatibility switchable via the config tool, changes include an adaptation to the custom FTX season times and a recoloured aerial imageLanding Strip Z41Animated ground vehicle traffic airside and towards the city with specific US vehicles (pickups, etc.).

Note: The ARR train is not animated in this version for technical reasons Autogen adapted to the aerial imageSeamless integration into the environment due to custom coastlines and a custom mesh covering the airport areaCustom new elevation for continuous transition from the airport to its surroundingsComplete taxiway and runway signageNight lighting with dynamic lights (can be deactivated via config tool)