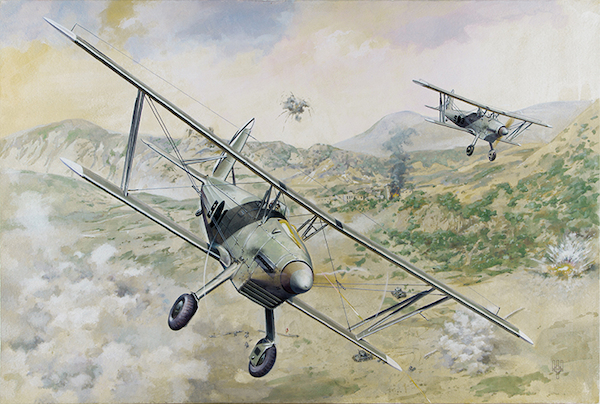 This product was added to our database on Thursday 14 November 2019.

In the mid-30s of the twentieth century, after Adolf Hitler came to power, began a significant withdrawal from the principles of the Versailles Agreement, which forbade Germany have a regular army and certain groups of troops, including aviation. More and more developments in secret mode turned into prototypes and went on trial to the army, given the possibility of their earliest production serialization in the context of changes in the domestic and foreign policy situation.
At this time, biplane planes still played a significant role in aviation, although the prospect of a monoplane design was already apparently more promising. However, biplane, as in the Great War, was considered the best for air combat in view of the best maneuverability characteristics.
In 1935, the aircraft manufacturing company Arado Flugzeugwerke GmbH suggested a new Arado 68 engine, which should replace their prior design Arado 65. The aviation guidance was somewhat cool in the project, as the Heinkel He51B, a second Heinel He51B fighter plane has already been tested, the main the characteristics of which satisfied the military, and therefore the future Arado 68 was facing a big problem. However, a number of disasters from the Heinkel He51B that occurred during the retraining of pilots on a new fighter aircraft allowed the Arado leadership to persuade the military to test their new aircraft, ensuring its superiority and safety comparing with Heinkel's design.
In 1936, the head of the fighter action was the main character of the Personal World Ernst Udet, who made a good statement about the new development of Arado. He arranged an air battle between He51 and Ar68 himself, piloting a new plane, during which the benefits of the Ar68 reach more obvious. With the same maximum speed, the Ar68 had much better maneuverability and was much more stable in flight.
In 1937, when the fighter began to enter the ranks of the Luftwaffe, the biplane era steadily reached to its logical conclusion. It was Ar68 that became the latest of Luftwaffe fighter planes. Together with other up-to-date developments, he (in three units) was sent to a true military trial of a civil conflict in Spain, where he was used not only as a fighter, but also as a lightweight strike aircraft to support ground troops. And only the appearance of the Republican troops of the newest Soviet I-16 forced the military not to direct Ar68 in maneuverable combat, since the advantage of a monoplane fighter, above all at speed, was more than substantial.
In the ranks of the Luftwaffe Ar68 were transferred to the training units in the pre-war years, but some of them were used as night fighters until the end of 1941.