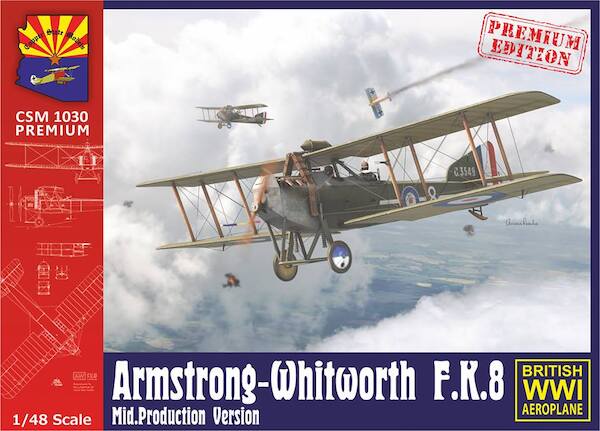 This product was added to our database on Thursday 6 December 2018.

We would like to announce the release of a state of the art new tool 1/48th scale model kit of the WW1 British two seater the Armstrong-Whitworth F.K.8. This is the first ever plastic model kit of this subject in this scale and the initial release is of two versions- the Mid and Late Production aircraft.

This kit is the culmination of more than a year's planning and development by the company, based in Latvia, which has revolutionised 1/48th scale modelling with its state of the art new WW1 kits of the British Sopwith Dolphin fighter and the French Caudron G.4 bomber and G.4 Hydravion floatplane.

The Armstrong-Whitworth F.K. 8 now joins this exclusive range of high quality plastic model kits and is available for worldwide sale.
The Armstrong - Whitworth F.K.8, affectionately known by airmen as the "Big Ack", was a popular WW1 British two seater operated by the Royal Flying Corps in the reconnaissance and bomber role. It was sturdy and dependable, designed by Dutch designer Frederick Koolhoven and intended as a replacement for the Royal Aircraft Factory's BE.2c and Armstrong Whitworth's earlier F.K. 3.

Around 1650 F.K.8 aircraft were produced, and it served on the Western Front and other theatres where it was used for reconnaissance, artillery spotting, ground attack and also bombing duties. Two Victoria Crosses were won by airmen flying F.K. 8's.

At the war's end eight F.K.8 aircraft were registered for civil use, with two of them used in Australia as part of the early fleet of the Queensland and Northern Territory Aerial Services which later became Qantas.

The Mid version has 112 plastic parts on four sprues plus 103 photo etch parts on three PE frets plus a resin engine and metal exhausts. The kit features a full colour instructions booklet and decals for four markings options.