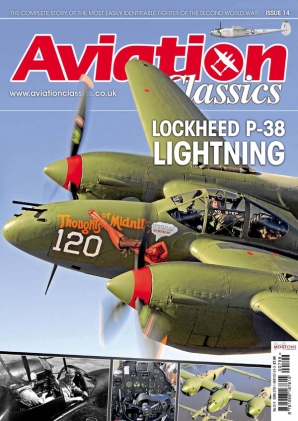 On January 27, 1939, Lockheed test pilot Ben Kelsey took the prototype XP-38 Lightning into the air for the first time. The big, twin-engined, twin-boomed fighter was to become one of the most easily identifiable fighters of the Second World War, and was to be the only US fighter aircraft to remain in production throughout the conflict. Its unusual design had a number of advantages.

The guns, being grouped close together in the nose, gave the P-38 a tremendous concentration of firepower. The tricycle undercarriage made ground handling simple when compared with the tailwheel designs common to the period. The P-38 was used across the world, undertaking long range fighter escort, fighter-bomber and reconnaissance missions in Europe as well as across the Pacific and Far East.

This issue of Aviation Classics tells the whole story of this ground breaking aircraft, as well as the people behind the development and operational success of this beautiful machine.