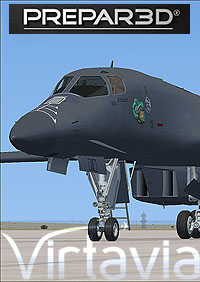 The Rockwell B-1B "Lancer", affectionately known as the "Bone" to its crews, is a key element of the American Strategic Long Range bomber fleet. A development of the cancelled B-1A, the aircraft - while not technically stealth capable - still presents a fraction of the radar profile of the B-52 and incorporates extremely advanced navigation, weapons, and avionics systems. Its swing wing technology, combined with four 30,000-lb thrust turbofan engines creates a beautiful, fast, and lethal package. The development of this successor to the B-52 began in the early 1960's and resulted in a contract being awarded to Rockwell in 1970. The B-1A first flew in 1974 but soon ran into political trouble. The project was cancelled in 1977 when only 3 prototypes existed, however 1981 saw Ronald Reagan order a fleet of 100 B-1Bs, the last of which were delivered in the early 1990's. Designed for low-level, high speed penetration, the B-1B saw action in the Kosovo conflict and second Gulf War.

For P3D only (not tested in versions prior to 4.5)
!! Weapons system only works in P3D Professional Plus version !!