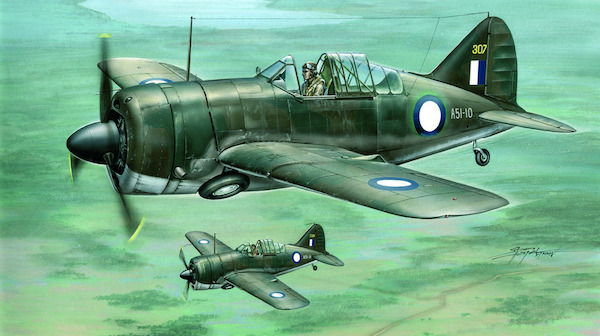 The Buffallo fighter is an aircraft full of contradictions. The first version to be produced was the F2A-1 (model 239), which although originally developed for the US Navy, was in fact used by Finland. Until the arrival of Bf 109 fighters, the Buffalo was the most successful of the Finnish fighter machines. The next versions, which were the F2A-2 and export models 339C/D and 339E were equipped with more powerful engines but also received much more equipment, armour and heavier armament which had negative effect on the type's rate of climb and manouverability. This fact, together with the conditions that the type had during its premiere in the Pacific Theatre of Operations with the enemy possessing the moment of surprise almost all the time, stood for the Buffalo's notorious reputation in the Pacific war. Not even the final and most powerful version, the US Navy F2A-3 did find any success. It was made famous during the Battle of Midway though, but its losses were unbearable. Simply, the Buffalo fighter was always inferior to its rivals, the Japanese A6M Zero and Ki-43 fighters. The naval F2A-3 naval version was identical to the export variant model 339-23 that was ordered by the Dutch East Indies Air Force hoping to replenish their 72 earlier-delivered planes of model 339C/D. But the war in the Pacific had broken out even before the aircraft could be delivered. All the machines of this batch were on their way when the Dutch East Indies capitulated and they were diverted to Australia. The RAAF were short of suitable fighter planes so they greeted the arrival of the Buffaloes and put them on duty. Within the RAAF, the Buffaloes flew in recce and patrol roles with 1.PRU and later also with several squadrons until 1943 when they were handed over to USAAF units based in Australia. There, they served for training purposes. The kit's plastic parts were acquired from Sword company, we have 3D-designed new clear parts and also new resin parts. The decal sheet offers two RAAF machines and two USAAF machines.