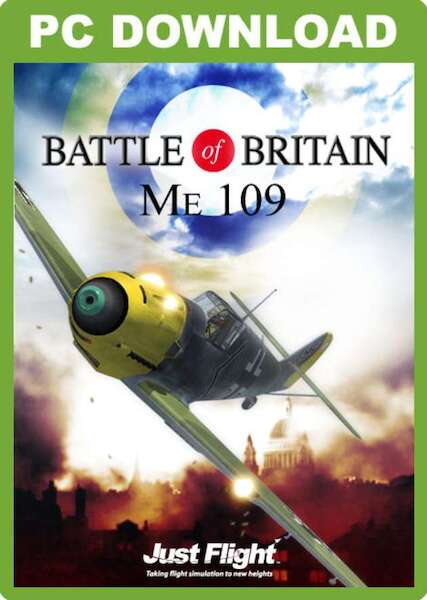 The Me109 was the Luftwaffe's equivalent of the RAF's Spitfire and these two fighters were to clash repeatedly during the Battle of Britain. This famous German aircraft saw action on many fronts, from the skies over Europe to Russia and down to the heat of North Africa.

All the aircraft from this Me 109 add-on are also available in the Battle of Britain 70th Anniversary package (Download and Boxed) which also includes our Spitfire and Hurricane add-ons.

Me 109-E Tropical 1/Jg27 - The Me 109E4 was very active in the African campaigns of 1941. 'White 3' from 1/JG27 is typical of the type and displays one of the many variations of tropical camouflage trialled throughout this period. Flown by Hans Joachim Mersaille.

Me 109-E II/JG53 - Flown by Gruppenkommandeur Hptm. Freiherr Gunther von Maltzahn of II/JG 53, this machine displays the red band carried by the unit between August and October 1940.

Me 109-E Japanese evaluation aircraft - Many countries were interested in the Me 109 as a front line fighter. Japan evaluated several of Germany's aircraft and this E4 is one of five sent there for testing. History records them as being 'unarmed'.

Me 109-E Escadrila 58, Grupul 7 Vanatoare - Stalingrad, late 1942. A single victory bar has been painted forward of the cockpit of this Me 109E of Grupul 7 Vanatoare (7th FG). The Donald Duck emblem was applied only to this Group's Emils. This aircraft was often flown by Locotenent aviator Alexandru Serbanescu and it was lost at Stalingrad at the end of 1942.

Me 109-E Russian - The Soviet Messerschmitt Me 109 is one of several supplied under the Soviet-German Pact of 1940. As the tide of war changed, it could very well be that these aircraft ended up fighting similar machines of the Luftwaffe.

Me 109-E 3.JG52 - This machine carries the famous 'Horrido' emblem of the JG2 unit but little else is know about the aircraft. It is finshed in an unusually dark mottle pattern and carries no familiar JG2 shield beneath the cockpit.

Me 109-E Stab III/JG54 - Flown by Oblt. Albrecht Drehs of Stab III/JG54 this aircraft force-landed near Margate in Kent on 12 August 1940, the height of the Battle of Britain.

Me 109-E Stab/JG26 - As flown by Pilot Major Adolf Galland, Geschwwader Kommodore of JG26. Perhaps the most photographed, modelled and painted Me109 ever, it really typifies the 'Emil' as it was flown in the Battle of Britain.