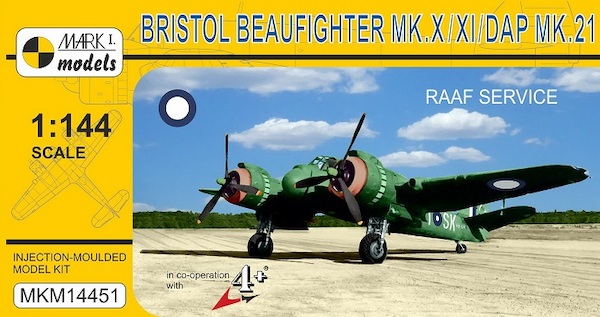 Product description
The Bristol Beaufighter was a British long-range heavy fighter, developed from the Beaufort torpedo bomber and first flown in July 1939. It became an efficient fighter and also night-fighter, employing the then novel AI radar.
The Beaufighter was a two-seat (three seats in later TF Mk.Xs), twin engine, all-metal mid-wing cantilever monoplane, fitted with a retractable undercarriage. It was powered by two Hercules radial engines and the armament consisted of four cannons in the nose, four guns in the starboard wing and another two guns in the port wing.
Following the first fighter variants, the Mk.I and VIs, a new version - the Mk.X, with more powerful Hercules engines became the main production Mark of the Beaufighter. In total, 2,200 aeroplanes were built and they were fitted with a dihedral tailplane with increased span and longer carburettor air scoops above the engines.
A dedicated torpedo-carrying version also appeared in mid-1942, known as the 'Torbeau'. A strike variant of this variant but with its torpedo gear deleted, was designated the Mk.XIC.
The highly successful use of British-made Beaufighters by the RAAF led to the Beaufighter production by the Australian Department of Aircraft Production (DAP) from 1944 onwards.
Known as the Mk.21, the DAP's variant was an attack and torpedo bomber and the design changes included another type of Hercules engines and some minor changes in armament. Between September 1944 and 1946, 365 Australian Beaufighter Mk 21s were built.
Colour schemes included in the kit:
1) Bristol Beaufighter Mk.X, A19-181 (ex-LZ322), White EH-Q, No.31 Sq., RAAF, Darwin airfield, Northern Territory, autumn 1944
2) Bristol Beaufighter Mk.XIC, A19-142 (ex-JM177), White J, No.30 Sq., RAAF, Vivigani airfield, Goodenough Island, Papua New Guinea, autumn 1943
3) DAP Beaufighter Mk.21, A8-124, White SK-T, No.93 Sq., RAAF, Labuan airfield, North Borneo, summer 1945
4) DAP Beaufighter Mk.21, A8-229, No.8 Communication Unit, RAAF, Madang airfield, Papua New Guinea, summer 1945