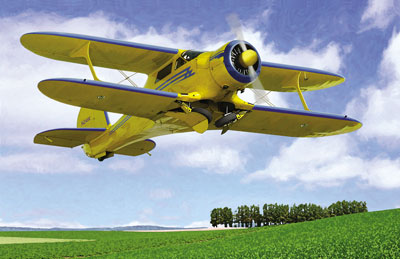 After establishing his own aircraft-building company in 1932 Walter Beech decided to create a small commercial plane, which would be radically different from its predecessors. All machines of this class built up until then were variations on the themes of the WWI period, but the times inevitably required new approaches in order to offer more capability and appeal to the customer.
Together with the firm's other designers, Ted Wells and Herb Roudon, Beech created a completely new aircraft concept: a biplane with a completely enclosed cabin, luxury fittings for the passengers, and an unorthodox staggerwing biplane layout, which was used by several fighters during WWI but not very widely.
The new plane, given the factory name of Model 17, rose into the air for the first time on November 4th, 1932. Flight results were even better than the designers expected. A month later the plane gained its flying certificate, and in January of the following year pilot Eric Wood won the Texas Cup for high-speed aircraft. During the next four years the plane was modified and improved several times and in 1937 appeared the D17, whose main new features were the removal of the ailerons to the
upper wings, with flaps located on the lower wings, a modified fin and rudder, a new braking system for the undercarriage, and additional fuel tanks.
After the D17A and the D17R came the D17S, which had a more powerful Pratt & Whitney R-985-SB Wasp Junior engine, and a new Hamilton Standard propeller. Takeoff weight increased to 1,925 kg. 53 of this version were built, all of them for private owners, but at the beginning of WWII some of them were requisitioned by the army, where they were known as the GB-2. The aircraft of the final series which appeared in 1946 became known as the G17S. The shape of the cowling and the windscreen of the plane were more streamlined than that of its predecessor, but only a small quantity of this model was built.
After the end of WWII, requisitioned Staggerwings were returned to civilian owners, and many of the military machines, built for military contracts, were also sold to private traders. These elegant and unique planes are prominent participants of modern air shows, and highly popular. This unusually shaped aircraft, created almost 80 years ago, is today the embodiment of aesthetic and tasteful aircraft design.