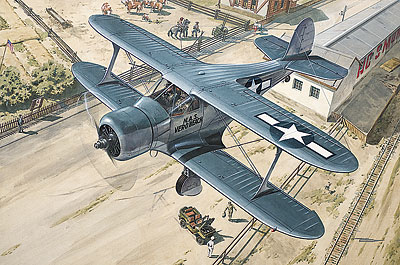 This product was added to our database on Tuesday 20 September 2011.

Owards the end of the 1920's American aviation enthusiast Walter Beech created his own aircraft engineering company, the Beech Aircraft Corporation. One of the most successful projects of the newly formed company was the Model 17 aircraft, named the Staggerwing after its unconventional biplane configuration, whereby the upper wing was positioned to the rear of the lower wing. In the middle of the Thirties appeared the D17 modification, which became popular among pilots. Before the USA entered into WWII, the Staggerwing had various occasions to join the fighting in the sky; in Spain, and in the confrontation between China with Japan.
After the United States entered into World War II, at least 118 Beechcraft Model 17 were requisitioned from private owners for army needs. The Beech D17 quickly became useful as a courier aircraft. Soon the military placed an order with Walter Beech's company for a further 270 of the type. Planes which were taken on by the Army were designated the UC-43, while machines which were delivered to Naval Aviation became the GB-1 and GB-2. There were no differences between the army and naval versions of the aircraft, except for the fact that navy aircraft were obliged to have on board a basic set of rescue equipment in case of emergency landing on water. The majority of the GB-2's joined the Naval Air Transport Service, where they were used until the final days of World War II. Their principal work during the whole period of war was the fast delivery of military staff and also important mail from the bases in Britain nearest to the continent. Often, navy planes with a characteristic marine blue coloration were based on airfields right next to military machines in their protective olive color, immediately distinguishable from them by their exterior. Britain's Royal Air Force and Fleet Air Arm received the Staggerwing under the Lend-Lease agreement. The British, traditionally, gave the plane their own name of Traveller, with the unusual spelling for an American of double 'L' letters.
According to the deal, the British should have received 107 machines of this type, but at least 12 of them never reached the shores of 'Foggy Albion', when their U.S. transport was attacked by a German submarine and sunk. The other 95 (60 former UC-43 were named the Traveller Mk.I, and 25 GB-2 the Traveller Mk.II) were spread throughout their territories under seven commands overall, and some machines were even sent to the Near East. The tasking of the aircraft, as by the United States, had a similar aim - fast courier service between distant bases, and delivery of important communications. After the end of the war, all Travellers should have been passed back to the U.S. in accordance with the terms of the Lend-Lease agreement, but some of them nevertheless found their way into the hands of new private owners in the UK.
The Beechcraft 17 did not achieve the fame of such fighters as the Mustang, or bombers like the Flying Fortress. However, its apparently minor contribution to the overall victory in the war was actually quite significant. The quick reaction of the military leadership to operational events often depended on the working connection between distant military units or the immediate delivery of secret orders, and therefore the Traveller could be considered not only one of the most elegant aircraft of its time, but a very important military machine.