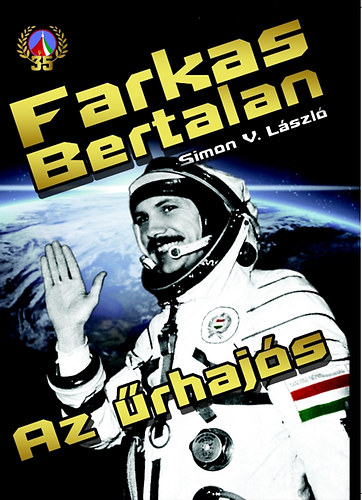 This product was added to our database on Sunday 5 May 2019.

An adventurous biography of the only Hungarian astronaut in the world. The man who came out to Space as a 97th man, started from a small village in T?d?ri, and reached the stars. This book was published for the 35th anniversary of the launch year.  Born in Gyulaháza, he graduated from the George Kilián Aeronautical College in "Szolnok" in 1969. He then attended the "Krasnodar" Military Aviation Institute in the Soviet Union, from where he graduated in 1972.

After earning his qualifications at the University Farkas joined the Hungarian Air Force and rose to the rank of Brigadier General. In 1978 he volunteered to become a cosmonaut and was selected as part of the fifth international programme for "Intercosmos". His backup cosmonaut was Béla Magyari. Farkas, along with Soviet cosmonaut Valeri Kubasov was launched into space on Soyuz 36 from Baikonur Cosmodrome on May 26, 1980, at 18:20.

While in Orbit Farkas conducted experiments in Material science. After 7 days, 20 hours and 45 minutes, and having completed 124 orbits, Farkas and Kubasov returned to Earth, landing 140 km southeast of Jezkazgan. Bertalan Farkas was awarded the title "Hero of the Soviet Union".

For the Space buffs!