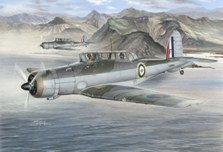 This product was added to our database on Friday 25 May 2007.

The Blackburn Skua was a strange aircraft. It combined the roles of both fighter and dive bomber, but performed neither role successfully. Despite this, the Skua held several "firsts". It claimed the first recorded shoot-down of a German aircraft in WWII by a British aircraft and claimed a part in the sinking of the first German capital ship, the cruiser Königsberg. The kit contains four sprues with dark grey plastic parts, injected clear parts, resin parts including detailed Perseus engine and photo-etched parts. Decals are for three aircraft stationed aboard Ark Royal during 1940 Norwegian Campaign. One aircraft sports artwork, something unique for FAA aircraft..