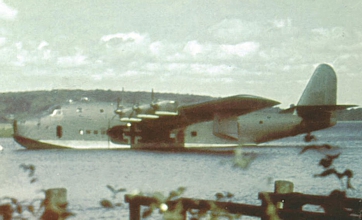 In 1936, the German airline Lufthansa initiated a program for a passenger transport of transatlantic flights. It culminated in an order for three Blohm & Voss Bv.222 flying boats. The first prototype, made its test flight in 1940. The flight characteristics were found to be satisfactory. As Germany geared for war, the Bv.222 were quickly taken over as a military transport. In 1943 a total of seven transport prototypes had been completed, all with armament variations and served with Lufttransportstaffel in the Mediterranean. The Bv.222-V7 was the prototype of the production version, which were completed with six 746kW Junkers Jumo 205D diesel inlines engines. At the end of the war, the V7 were scuttled by their crews at Travemünde.Three remaining Bv.222s were captured and subsequently operated by Allied forces. It operated up to 1947, when it was scrapped.