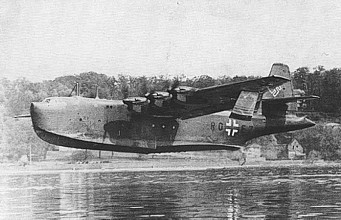 This product was added to our database on Monday 20 february 2012.

In 1940, Blohm & Voss began design work on a 8-engine flying boat, the Bv.P.200 for RLM, which was expected to carry 120 passengers. However, since the Jumo diesel engines never achieved operational maturity, the P.200 project was dropped. In 1941, Blohm & Voss submitted a reworked design which was virtually an enlarged Bv.222. The flying boat was given designation Bv.238. A small-scaled flying model, the FFG.227 was to be built in order to avoid difficulties in the Bv.238 prototype construction. Both the FFG flight tests and development of the Bv.238 began as early as 1942. Because of the increasing thread of Allies bombing raids, the Bv.238 delayed it first flight until March of 1945. Flight trials produced such outstanding results. Only after four test flights, the unarmed prototype was ready for front-line testing. Just four days before the war's end, the Bv.238 was sunk while docked on Schaal Lake by gun fires of four Allies P-51 Mustangs. The Bv.238-V2 and V3 were under construction when the war ended. Their hull and wing parts were subsequently scrapped