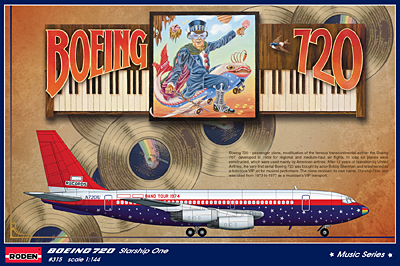 The history of the operation of the Boeing 720 as a passenger plane was mostly unexceptional, as most other airliners, but at least one machine out of the relatively small number built, left behind some special memories - not just in aviation history but in the history of the rock music of the Twentieth Century. This machine with the serial number N7201U was delivered to United Airlines and was used by it on internal routes from 1960 to 1973.
In 1973 famous former American actor and singer Bobby Sherman together with his manager Ward Sylvester, co-owners of artists agency Contemporary Entertainment, purchased the plane from United Airlines with the intent of converting it into a convenient and comfortable 'flying hotel' for effecting flights between cities and out of the country by various artists. The music industry during this period was at its peak - a considerable number of performers of all styles of music plied their trade on numerous tours of the territory of the USA, and without any particular financial drawbacks the considerable fees received by them for concerts at that time allowed them to rent the plane for fast and comfortable travel from city to city.
The well-known band Led Zeppelin was the first of many acts who fully appreciated the advantages of such VIP accommodation. Their manager Peter Grant never held back over issues connected with comfort for the members of the group, and so for Zeppelin's tours, which often covered some tens of cities of the USA during the season, Starship One was a real find.
In 1973 Reginald Kenneth Dwight, better known in the world of music as British pop idol Elton John, released his latest album 'Goodbye Yellow Brick Road'. In its support a huge world tour was planned, and for the American part of the tour the singer's manager immediately turned to Bobby Sherman to ask him about renting a plane. Led Zeppelin's tour had just finished, and Starship One was available for some time. The ship was immediately stenciled with the inscription of its 'new owner' and Elton John flew in it from city to city, one performance to another. He was delighted with the comfort of the 'hotel in the sky' and the next year, when his follow-up album 'Caribou' appeared and the question of a new tour arose, the pop idol's managers agreed with Bobby Sherman on another lease of Starship One. This time the aircraft was painted in a new scheme, a blue fuselage bottom with numerous stars and a red vertical tail. In this form, and labeled as the Elton John band tour 1974, in the fall of the same year the singer made a highly successful tour across the United States.