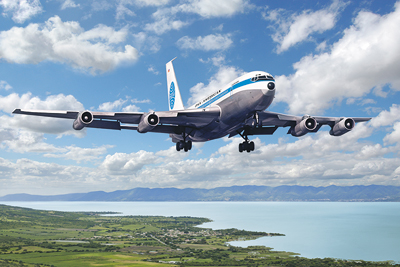 1954 saw the first flight of the Boeing 707, the intercontinental passenger plane which radically changed the concept of air transportation. The Boeing 707 was a truly revolutionary airplane, and it is not surprising that its great success encouraged its manufacturer to develop a version for short-haul & medium-haul transport. The first flight of the new machine, now known as the Boeing 720, took place in November 1959. The Boeing 720 differed very little visually from its predecessor, and only a careful examination could tell the difference between these machines. The fuselage of Boeing 720 was shorter by 2.45m, and the wing had a slightly bigger sweep and other mechanical changes. The Boeing 720 could carry 116 people - 38 in the first class salon and 78 in second class. The plane had JT3C-7 engines of 5670 kgf thrust each.
In total 65 machines were produced of this variant, which was soon modified as the Boeing 720B with more powerful JT3D engines. 89 of the 720B were produced.
The Boeing 720B differed visually from its predecessor in the new shape of its engine nacelles, and also in the different arrangement of doors and emergency exits on the sides of the fuselage. One of its earliest and best-known operators was one of the oldest U.S. airlines, Pan American.
The Boeing 707's successor did not achieve the huge success which it had enjoyed. The airlines did buy the 720, but without special interest. A large number of machines was soon sold on by American owned airlines to other countries and to other continents. Some machines were in use until the early 1990's