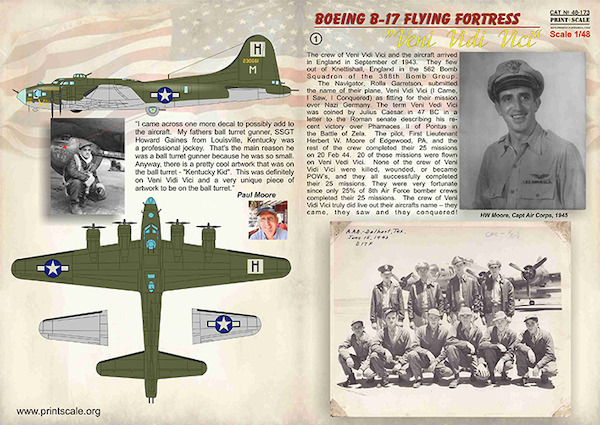 Boeing B17F Flying Fortress 'Veni-Vidi-Vici" (Print Scale PRS48-173)
€ 8.22
EU: incl. tax € 9.95
Reduced shipping charge may be applicable depending on country of destination and contents of shopping cart. Will be shown before checkout.Add to cart

This product was added to our database on Wednesday 17 April 2019.

Boeing B-17F Flying Fortress "Veni. Vidi. Vici" The crew of Veni Vidi Vici and the aircraft arrived in England in September of 1943. They flew out of Knettishall, England in the 562 Bomb Squadron of the 388th Bomb Group. The Navigator, Rolla Garretson, submitted the name of their plane, Veni Vidi Vici (I Came, I Saw, I Conquered) as fitting for their mission over Nazi Germany. The term Veni Vedi Vici was coined by Julius Caesar in 47 BC in a letter to the Roman senate describing his re-cent victory over Pharnaces II of Pontus in the Battle of Zela. The pilot, First Lieutenant Herbert W. Moore, of Edgewood, PA and the rest of the crew completed their 25 missions on 20 Feb 44. 20 of those missions were flown on Veni Vedi Vici. None of the crew of Veni Vidi Vici were killed, wounded, or became POW's, and they all successfully completed their 25 missions. They were very fortunate since only 25% of 8th Air Force bomber crews completed their 25 missions. The crew of Veni Vidi Vici truly did live out their aircrafts name-they came, they saw and they conquered! The next crew that took that plane diverted into Sweden and the crew and plane were interned. That aircraft was refurbished and used by the Swiss to make the first commercial flight across the Atlantic after the war and landed at La Guardia Airport.