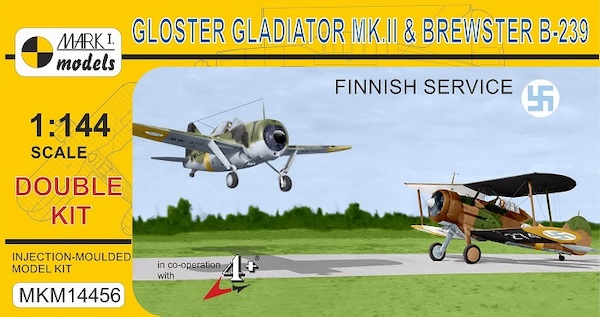 The Buffalo fighter was designed and built in the late 1930s by the American Brewster Aeronautical Corporation. It was a single-seat, all-metal mid-wing monoplane with fabric-covered control surfaces and a retractable undercarriage. Powered by a Wright R-1820 Cyclone radial engine, it was fitted with Hamilton Standard propeller and its armament consisted of two machine guns in the nose and one in each wing. Early in 1940 forty-four de-navalised aircraft were sold to Finland as the Model B-239. In Finnish service the Brewsters gallantly fought against the Soviet Union, becoming popular among its pilots and earned a reputation as one of the most successful fighters. The last B-239s continued to fly until 1948.
The Gloster Gladiator was a British-built biplane fighter developed from the Gauntlet and its prototype, designated the SS.37, flew in September 1934. The first production model was the Mk.I of 1937. An improved Mk.II version followed in 1938 and eventually 270 aircraft of this Mark were built. The Gladiator Mk.II was a single-seat biplane of metal construction with mixed metal and fabric covering. It was fitted with a fixed undercarriage and powered by a Mercury radial engine turning three-blade metal propeller. Its armament consisted of four guns, of which two were mounted in the fuselage and two under the lower wings.
Gladiators were successfully exported to many countries and saw service with more than 15 air arms, including those of Belgium, China, Egypt, Free France, Greece, Iraq, Ireland, Latvia, Lithuania, Norway and Portugal. They also equipped RAAF and SAAF squadrons in the Middle East and North Africa. Finland obtained a total of 30 Gladiators in early 1940 which took part in the Winter War and later also fought during the Continuation War. The Finnish Gladiators served until 1945

Two injection-moulded kits (the Gladiator Mk.II and Brewster B-239) are supplied in this box, containing 37 and 20 parts, respectively. Clear parts (cockpit canopies and a ventral fuselage window) are also included (1 and 2, respectively). Three resin parts are provided for the Gladiator kit. A comprehensive decal sheet is included.