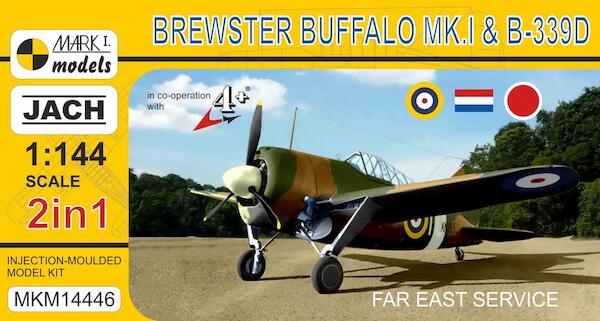 The stubby Buffalo fighter was designed and built in the late 1930s by the American Brewster Aeronautical Corporation and was destined for the U.S. Navy operations from aircraft carriers. It was a single-seat, all-metal mid-wing monoplane with fabric-covered control surfaces, powered by a Wright R-1820 Cyclone radial engine.
The Model B-339E, or the Buffalo Mk.I, was an export de-navalised variant of the F2A-2 for the Royal Air Force service in the Far East. With 170 aircraft built, it was inferior in performance to the original F2A-2 model having a less powerful engine and being heavier. It was fitted with Hamilton Standard propeller with a large spinner and a fixed tail wheel. Its armament consisted of two machine guns in the nose and one in each wing.
The first Buffalo Mk.Is arrived in Singapore in the spring of 1941, where they also equipped a few RAAF and RNZAF squadrons. In the Burma/Malaya theater the Buffalos bravely fought against the Japanese, but were soon outclassed by the Zero fighters. When the Commonwealth units withdrew to the islands of the Netherlands East Indies, a handful of Buffalo Mk.Is were turned over to Dutch squadrons. In 1942, some ex-Dutch aircraft were captured and tested by Japan.