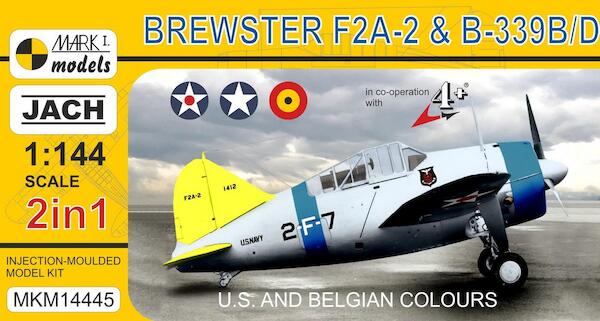 The stubby Buffalo fighter, designed and built in the late 1930s by the American Brewster Aeronautical Corporation, was one of the first U.S. Navy's monoplane aircraft destined for carrier-borne operations. It was a single-seat, all-metal mid-wing monoplane with fabric-covered control surfaces, powered by a Wright R-1820 Cyclone radial engine.
The F2A-2 was the second variant, replacing the A-1 on the production line in the spring of 1940. It was equipped with cuffed Curtiss Electric propeller, large spinner and four machine guns of the same calibre - two in the nose and one in each wing.
Forty-three aircraft were ordered by the Navy, while another eight F2A-1s were modified to A-2 standard. Belgium ordered 40 Brewster B-339B aircraft, a de-navalised F2A-2s with a longer tail, but in the event, none of these planes reached the destination country. The Model B-339D was originally built for the Netherlands East Indies, but following its surrender a handful of aircraft were transferred to the U.S. 5th Air Force in Australia and then lent to the RAAF.